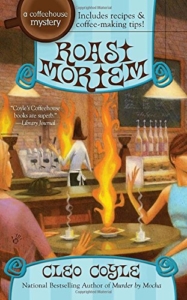 Plot in Peril: Mystery Up In Smoke

In the ninth Coffeehouse Mystery, Roast Mortem, it’s back to Brooklyn for some simmering recipes, hot firemen, and combustible family secrets. Clare’s relationship with dashing detective Mike Quinn is going well and coffee business is steadily percolating. Old family friends are reconnecting and Madame is feeling the need for a bit of surreptitious romance when the opportunity to retrieve an antique blender formerly belonging to The Blend arises. Not one to let business go along without pleasure, Madame takes Clare for some introductions and the duo instead find themselves trapped in a burning building, seconds away from perishing when New York’s finest show up to stifle the blaze and rescue the phased survivors.

Before the investigation even starts Clare sees signs that their former rival coffee house and somewhat friend’s establishment was torched deliberately. When other coffee houses begin going up in flames, Clare follows the sooty trail into a past of deception, deals, and thwarted love. Along the way, she must fend off the advances of Mike’s flirtatious cousin – the fire chief himself. Soon not only Clare’s relationship and her beloved Blend are in trouble, but her life is on the line as well.

Atmospheric with that aromatic mélange of cosmopolitan big city cozy and that certain aura that goes along with a vintage coffee shop, the long running Coffeehouse series continues Clare’s adventures through its rich description and sumptuous bounty of fresh brew and ground coffee beans. Throw in the post-9/11 nod to the bravery of firemen in general and New York firemen specifically, and you have the recipe for a flavorful blend chocked full of nuts with dreams of arson and tangy with the bitterness of familial regret. It’s a regular whirlwind of sweet and sharp mixed into an uncertain world and had it not been left rather cold while all those flame metaphors were running, you know, like wildfire throughout the narrative, it just might have been a cup readers savored instead of bolting down in favor of the next, hopefully better, edition to an otherwise strong and consistent series.

The action starts pretty early, as does Clare’s investigation and all of the associated speculations, but it soon gets bogged down, the usual appeal of the characters lost in some pretty trite dialogue and unrealistic scenes. The fireman, all of the brave he-men sort and Mike’s alpha male cousin (confusingly named Michael) are more intent on flirting with Clare than staying alive or even being relevant to the moment. This soon becomes mind numbing and frankly annoying. The vibe even continues to a pseudo-rapey height with Michael and leaves readers huffy and out of joint. All the dialogue and the moments where Clare could be sussing out the sinister secrets of the fire department are instead spent on suggestive banter that even a teenager would find immature and fake.

Meanwhile, we delve further into the tension between Detective Mike and flame haired cousin Fire Chief Michael. It’s time for the big payoff and the actual low down on the inner family scandal, and Roast Mortem builds all the suspense to a near explosion point. Only, in the end, the dread secret is something rather mundane which never required the status of a secret anyway. Sigh.

The arsonist is a little more complicated. However, in between borderline misogynistic flirting and subtle espressos over Mike vs Michael problems, the clues really aren’t there and the solution, while in-depth and suitably serpentine, couldn’t be intuited by the most vigilante clue solving readers around. Overall, Roast Mortem still has some of the atmosphere and of course, our favorite characters, but it’s a distinct low-point in an otherwise grade A series. Everyone takes a break sometimes and so if this is the series break from its greatness, I can happily handle it, enjoy the less than perfect Clare time, and continue right on into the tenth novel.