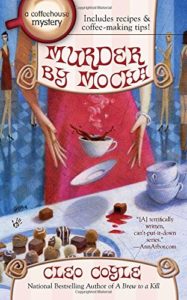 If there’s one thing that’s more sumptuously sensual than coffee, it’s chocolate. Aphrodite’s Village, an exclusive women’s online community with individual sectors run by established “goddesses” is capitalizing and exaggerating the aphrodisiacal properties of everyone’s favorite combo by teaming with The Village Blend to produce an instant coffee guaranteed to spice up your love life. Madame, normally averse to such blatant commercialism, is only supportive because the goddess in charge of the product is an old and elusive friend. When Clare gets drawn into the dubious action and goddesses start dropping dead in Aphrodite’s temple, it becomes apparent that an old vendetta is at work. That’s not all, however. The scheming empire built on back-stabbing, ruthlessness, and superficiality isn’t being exactly truthful about their esteemed product’s ingredients either.

Cranking the cozy while veering off into a darker tone, Murder by Mocha is quite possibly my favorite of the Coffeehouse books so far. The Village Blend remains the same steadfast icon of quaintness merging big city with the small enjoyments of everyday life: your morning coffee, sipped slowly at your favorite table, stationed to look at the comforting bustle of harried commuters. The careful pulls of espresso shots and the snarky banter of the baristas is a backdrop we have long ago come to love and seek. But under all of this bubbling innocence a cauldron of ferocious rage is boiling, a plot rising to the surface in the voice of an unseen killer. Clare’s suspicions that Aphrodite’s Village is not all that it seems are confirmed when one dusky morning she’s called by Madame to a hotel where the first body, poised in a blood-soaked bed, is located. Unlike the usual investigation, however, Madame wants Clare to keep mum about the find . . .

Dark and bittersweet, like the best of chocolate, Murder by Mocha begins the action and tension early and instead of Clare’s usual investigation, a moral question of loyalty and trust eschews the usual pattern and complicates everything. It’s this delicious complication, combined with the most visceral murder scene yet (and the gloomy hotel room at pre-dawn description that goes with it) that makes the book so memorable and satisfying. Should Clare cover-up a murder for her ex-mother-in-law? For the Village Blend? Should she simply stay out of this one? Should she turn in her suspects to the police despite Madame’s wishes? Why is Madame suddenly involved with an old “friend” whom she has never mentioned? Should Clare go rouge and find the answers hidden in Madame’s past – and potentially the killer – herself? Add to this a new hurdle in her relationship with Mike Quinn that might cost them their love, and you have a mystery with all the verve of a thriller, the soul of a crime novel, and the atmosphere of a cozy. How could you want more?

Keeping both the investigation and the twisting action strong, the conclusion is just as satisfying as the vivid atmosphere. The novel ends with a bang, for sure, but also some lingering doubt that will have readers desperate to return to the Village Blend and the complicated relationships among the characters. Now my fiction addiction has combined my true loves: coffee and chocolate with some hair-raising schemes and ruthless killers. It’s going to be a fantastic new year! Highly recommended.