Cat-ch Me If You Can 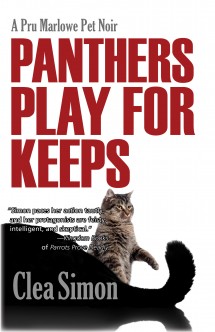 I suspect that most pet owners wonder what might be going through the minds of the animals with which they share their space.  I know I do, though I’m also quite sure that I don’t really want to know.  Where I like to imagine thoughts of love and devotion, my cats are probably thinking something like, “Feed me or I’ll kill you.  And I might try to kill you anyway.”  Fortunately for me, I’ll never really know.  Unfortunately for her, Pru Marlowe doesn’t have that luxury.  For, you see, Pru can hear what animals think.  That’s right – she’s a real pet psychic.

Unlike the pet psychics one might see advertising on late night cable TV, Pru does not allow the world to know about her abilities.  Author Clea Simon has made Pru’s “gift” quite a bit more complicated than just knowing that Fluffy feels stressed by being a purse dog.  Pru senses all sorts of things from all sorts of animals, whether she wants to or not.  Smells, sounds, emotions – she never know just how much she’ll pick up, or when, or what it really means.  She finds that cross species misinterpretation is quite common.

In this installment of the Pru Marlowe Pet Noir series, Panthers Play for Keeps, Simon has her protagonist training a service dog for a wealthy man who is losing his eyesight.  In the process, she and the dog stumble across the remains of a young woman who appears to be the victim of an animal attack.  Since Pru, like all good cozy mystery heroines, is inherently nosy, she will definitely be involving herself in that investigation.  Her rather complicated romantic relationship with Detective Jim Creighton just throws another wrench into the works.

Panthers Play for Keeps is the fourth book in this particular series from Simon.  Pru is a somewhat difficult character to really, truly like.  She’s suspicious, inconsistent, jealous, and extremely guarded.  She doesn’t want close relationships with people; she can barely manage the one solid relationship in her life – with her cat.  Her abilities with animals inform every decision she makes in her life, creating a barrier between her and the rest of the human world.

However, she is definitely interesting.  Coming into this particular series in the middle might not be the best idea – I suspect if I knew more about Pru coming into Panthers Play for Keeps, I would have a better understanding of her seemingly irrational fears and motives.  Her interactions with the animals are always intriguing and sometimes amusing as she reveals what pets really think of their owners and how they would like to be treated.  Who knew that a neutered Bichon Frise could be gay?

The peripheral characters are exactly that – extremely peripheral.  We have some folks who I assume are recurring about whom we learn little and are expected to understand quite a bit.  Another hazard of not starting at the beginning of the series.  Same holds true for the romance between Pru and Creighton – I finished the book with little more insight into that weirdness than I had when I started.

None of that, however, is nearly as troublesome as what really ruined this particular book for me – I figured out the mystery a long, long time before Pru even got close.   That shouldn’t happen.  I don’t really expect cozy mysteries to be intricately plotted since they are as much about recurring characters as they are about the particular mystery of the moment, but I do not accept that the protagonist can’t see what is right in front of her.  Whatever her history is with misinterpreting animal signals, this one is loud and clear early on.  And that, my friends, is a book killer.

Overall, I think the Pru Marlowe Pet Noir series has a lot of potential in concept, but Panthers Play for Keeps suffers in the execution.  It doesn’t stand alone well, with too many areas that warrant further detail, and the mystery is so weak that Pru ends up looking stupid for not seeing the basics much, much earlier.  So I can’t really recommend this volume, though I think that animal lovers might enjoy the series premise enough to give the earlier books a chance.  2 stars out of 5 for Panthers Play for Keeps.