Most Dangerous Book, A 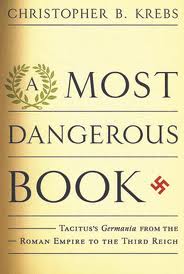 History, given that it necessarily involves human beings, often travels in mysterious ways.  But some mysteries are more puzzling than others.  How did Tacitus, born in AD 56 and generally considered the greatest Roman historian of his time, end up as the centerpiece of the Nazi propaganda machine almost two millennia after his death?  While my knowledge of Roman historians is minimal, I know enough about World War II to at least find this question intriguing.  In A Most Dangerous Book, Christopher Krebs provides a surprisingly entertaining explanation, making sense of the seemingly inexplicable.

Krebs, a classics professor at Harvard, explores the background behind Tacitus’ most cited work, Germania, a history of the German tribes from the perspective of the Roman Empire, written around the turn of the 2nd century.  At the time, these tribes had acquired some notoriety due to their success at resisting the conquering efforts of the all-powerful and unstoppable empire, making this a topic of particular importance.  In his wide ranging monograph, Tacitus describes the Germans as noble and pure, but also barbaric and crude, providing much for future generations to capitalize on.  While the work is appropriately referred to as an early example of ethnography, it was entirely based on second-hand information as Tacitus never traveled north of the Alps.

The author then goes on to explain how this document barely managed to survive the Dark Ages, reappearing in the middle of next millennium where it was increasingly manipulated, edited and taken out of context to fuel the horrific fires of German nationalism and eugenics, becoming the holiest scripture in the Nazi religion.  Not surprisingly, its popularity has waned a bit since 1945.  Krebs leads the reader through this convoluted historical maze with remarkable agility, touching on much of European history in the process. 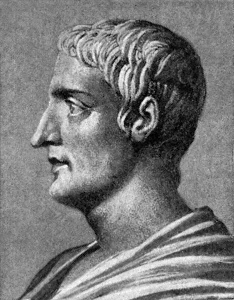 Without a doubt, this is not light reading.  But despite my lack of any expertise in the area, I really found Krebs’ work to be an entertaining and enlightening journey.  He doesn’t let his considerable professorial chops get in the way of telling a good story, letting the tension build as Heinrich Himmler grows increasingly orgiastic in his pursuit of Aryan purity.

In the end, A Most Dangerous Book is a detailed, entertaining and exhaustively researched look at one of the most effective and repulsive propaganda machines in the history of the world and provides a cautionary tale about the ways ordinary humans can be convinced to do terrible things.  While history is full of individuals who’ve found excuses to be evil without needing the words of an ancient Roman historian to help them, Krebs’ enlightening story provides a thought provoking example of the importance of an informed and skeptical citizenry.  Highly recommended for all history buffs.

Dave’s reviews of other books about the Roman Empire: