Man of Many Dichotomies…

He’s one of the most important people in the history of the United States and lived to the ripe old age of 83.  How do you write a petite 188 page biography of the man that is meaningful and avoids superficiality?  Concision is the word you’re looking for and Christopher Hitchens displays his mastery of the concept 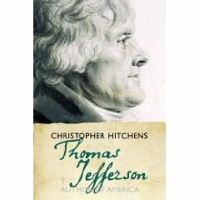 Part of the Eminent Lives series, Hitchens tells the story of the 3rd US president, focusing primarily on his political life.  He discusses Jefferson’s role as US Minister to France and Secretary of State in the Washington administration and his eventual ascension to the presidency, by a hair’s breadth over Aaron Burr in 1800.  The author convincingly argues that Jefferson, more than any of the other founding fathers, had a singular impact in making the United States what it is today.

The late Mr. Hitchens was perhaps best known as one of the world’s foremost atheists and was an acclaimed and controversial essayist on many issues for decades.  While this biography displays plenty of Hitchens’ contrarian tendencies, he doesn’t appear to come at the topic with any particular agenda.

What Hitchens does best is display the many dichotomies that challenged Jefferson throughout both his political and personal life.  The man owned slaves and was clearly racist from a 21st century perspective, but he also opposed slavery.  He was a strong proponent of “state’s rights” and gave future secessionists

Jefferson’s Rotunda at the University of Virginia

plenty of written ammunition, but he also was one of the main architects of federal power.  He treasured his agrarian exertions at Monticello, but also understood that with shrewd maneuvering the US could become a dominant world power.  Somehow Hitchens makes sense of these daunting contradictions, bringing out what is most interesting about his subject.  His almost touching discussion of Jefferson’s relationship with Sally Hemings is particularly enlightening.

Given his space constraints, Hitchens does presume a basic working knowledge of early US history, but I’m certainly no expert – not even a buff – and only rarely did I feel that the water was getting a bit deep.

As a fan of his other work, Hitchens’ Thomas Jefferson is thoroughly enjoyable, revealing much that is new to me with unique flare and intelligence.  However, I expect that even those who’ve never read the Brit’s writing will find this work illuminating.  I enthusiastically recommend it for readers interested in a brief yet insightful look at one of the great presidents.