What do you do when you know that you probably only have a year or two to live?  If you’re Christopher Hitchens, you just keep writing.  The award winning author, atheist and provocateur was diagnosed with advanced esophageal cancer in June 2010 and eventually succumbed in December 2011, but he kept 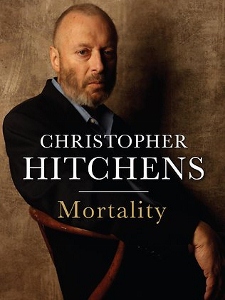 writing the whole time.  Mortality is a compilation of the Vanity Fair columns he wrote about his harrowing journey through the world of cancer.

I’ve admired Hitchens’ writing before – on atheism, history and current events – and while this work delves into weightier stuff, it still has the same vibrant and sardonic voice, even though he’s writing of his own demise.  Despite the brevity of the work, he has plenty of opportunity to poke at religion and those who take joy in the fact that God is finally punishing him.  His critique of prayer is particularly pointed and compelling.

While the description of Hitchens’ gradual descent is powerful and often poignant – rarely self-pitying – I actually found his unrelenting drive to be the most amazing part of the book.   Despite continued setbacks and repeated bouts of miserable therapies, he continued to write with remarkable talent and wit, although it’s gut wrenchingly apparent that his faculties are gradually fading as the book nears its end.  It’s painful to read, at times.

Dying as he wrote.   Writing as he died.  Hitchens truly squeezed every last literary drop out of his remarkable life in Mortality.  Certainly not enjoyable, but definitely powerful, I’m confident that fans of the author will find this a worthy addition to his body of work.