My Sparklepony Is Uniquer Than Yours… 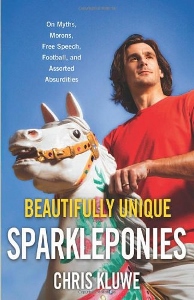 There are some things in life that are particularly memorable the first time you encounter them:  the taste of bacon ice cream, the sight of a wild sea turtle swimming in the ocean, the exquisite pain of angry honey bees stinging you in the face.  While it may not prove as notable as these wonders, I recently experienced another personal first:  a book by an NFL punter.

Chris Kluwe is a UCLA graduate – double majoring in political science and history – who has been punting professionally since 2005 for the Minnesota Vikings before moving to the Oakland Raiders earlier this year.  He led the rather anonymous life of a punter until he wrote an open letter defending same-sex marriage to a Maryland politician which gained such notoriety that he decided to publish an entire book of his rants, diatribes and random thoughts, entitled Beautifully Unique Sparkleponies.

Bear with me while I fill in a bit more of the back story as it was this one scathing essay that prompted me to buy the book.

Emmett C. Burns  Jr is a Maryland state delegate who in August 2012 was compelled to write a letter – on Maryland State letterhead no less – to the owner of the Baltimore Ravens complaining that linebacker Brendon Ayanbadejo had made statements in favor of same sex marriage.  He instructed the owner to “inhibit” any further such statements from his employee.  Kluwe caught wind of this outrageous attempt at free speech suppression and posted a hilarious, profanity laced response on the sports website, Deadspin, prompting him to become a hero for gay marriage advocates everywhere.

Kluwe’s letter, a cleaned up G-rated version of the same letter – even funnier – and sixty additional short essays on topics as varied as John Galt, time travel and groin injuries are included in this unique collection.  A voracious reader and unreformed Kurt Vonnegut fan, Kluwe writes like he’s had one too many cans of Red Bull, displaying his unlimited obsessions with sports, science fiction and video games. 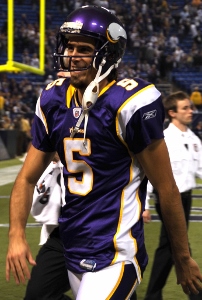 Much of what he writes is silly and not consistently entertaining, but there are at least two things that bring out the best in his scathing wit and pointed verbiage:  injustice, particularly – but not exclusively – related to gay marriage; and any reference to the idea that he’s “just a punter”, who isn’t worthy enough to have the right to express an opinion.

While readers looking for a sober, mature approach to the issues of the day are likely to be unimpressed, there’s no denying that this athlete is an intelligent individual who writes from the heart, skewering hypocrisy and injustice at every opportunity.  His politically oriented writing is particularly effective and I found much of it quite inspiring.

While essays entitled, “Hey, Douchebag” and “Kiss My Ass” may not be for everyone, Beautifully Unique Sparkleponies is an entertaining trip into the world of one of the most candid personalities in professional sports.  Writing with passion, empathy and not afraid to speak his mind – even if it offends those who “own” his punting leg – I’m quite confident that Chris Kluwe will continue to have more to say as the years go by.  I think it would be a good thing if there were more athletes like him.