Art of Fielding, The

Swinging for the (Literary) Fence

What is it with me and baseball books and movies?  Honestly, I couldn’t give a rat – or even two – about the game itself; it’s just not my thing.  Yet Field of Dreams is one of my favorite movies and now I’ve thoroughly enjoyed author Chad 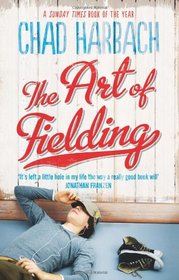 Harbach’s The Art of Fielding.

The book begins as we meet Mike Schwartz.  He’s a big – really big – catcher playing his final summer league baseball game before returning to his small Wisconsin college to begin his sophomore football season.  He’s tired and sore and hot but he can’t help noticing that in among the crappy players his team just pounded, there’s a kid taking the field after the game to field ground balls.  One after another, perfectly, gracefully caught and thrown.  The kid is the best shortstop Mike has ever seen.

What follows is the story of Mike, Henry Skrimshander (the magical shortstop) and a select few other denizens of Westish College, sitting on the western shore of Lake Michigan in aging splendor.  Henry comes to Westish as green as could be – never expecting to go to college at all, forget going to play the game to which he is absolutely devoted.  He has all but memorized his baseball idol’s book, The Art of Fielding, and is never happier than when he is on the field.

Add in Henry’s gay, multiracial roommate Owen; Guert Affenlight, president of the university; Pella, his 23-year-old prodigal daughter; and a smattering of minor characters from the team and the campus and you have the pieces that make up The Art of Fielding.

Harbach could have turned this mélange of characters into a relatively routine coming of age story in which Henry succeeds and fails and learns valuable lessons about life and baseball.  Instead he chose to incorporate full stories for all five of the major characters, giving them each a unique voice and denying them omniscient knowledge of the lives of the others.  The result is a complex portrait of five different people brought together by circumstance (the circumstance happens to be college baseball) all struggling through several intertwined years on the Westish campus.

We get a chance to feel the campus as a real place – almost a character in itself.  Harbach is from Wisconsin and though many of his locales are fictional he has a good feel for the atmosphere of a small, not particularly prestigious but proud and accomplished Midwestern college.  The type of institution that you can find in every state in the union, but that he makes his own by tying Affenlight to Herman Melville and tales of Great Lakes voyages and the maritime pull that a lake as big as Michigan can exude.  Giving himself five characters to work with allows him to gather in baseball and college and literature and relationships in a way that a single or even two character focus would prohibit.

Harbach makes one blunder – one that I see often in current “literary fiction” – he can’t resist the opportunity to show off.  Having an enormous vocabulary is a wonderful thing (especially for a writer) but feeling the need to scatter your book with obscure words and dense literary references is off-putting to those of us who did not major in English.  And probably to most of us who did.  It’s an affectation and a distraction, one that does a disservice to his otherwise beautifully written and developed characters.

Overall, though, I very much enjoyed The Art of Fielding and found its healthy 512 page length easily manageable – I practically raced through it.  There’s something about really well written sports drama that lends itself to edge of the seat reading, and this is really well written sports drama.  Recommended for anyone with a moderate tolerance for a pompous author with a great story to tell and most certainly for any baseball fan.  4 stars out of 5.