At the Water’s Edge

From Sea to Land and Back Again… 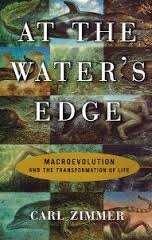 The theory of evolution has one small problem.  It’s an indisputable fact that every mother – be she fly, frog or flamingo – gives birth to offspring of the same species.  Unfortunately, this reality presents quite a challenge when it comes to explaining how new species arise over time.  While it seems plausible that almost undetectable changes from generation to generation, when multiplied over millennia, might result in a longer snout or stronger talons, illuminating the really big transitions in the tree of life is a much thornier proposition.  How does a fish, exquisitely tuned over millions of years to survive in its aquatic environment, become transformed into a four-legged reptile, entirely at home on terra firma?  While the fact that it happened is incontrovertible, the actual details and logistics are still the subject of much debate in the paleontological world.  Carl Zimmer, an award winning science journalist who’s braver than most, strives to make some sense of the story in At the Water’s Edge.

But wait!  There’s more.  Not only does Zimmer illuminate the story of vertebrate evolution from sea to land about 350 million years ago, he brings the story full circle, describing how mammals returned to the sea about 300 million years later in the form of the great whales. 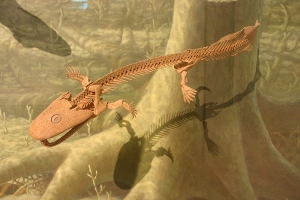 Acanthostega, last of the fishes.

Starting with the early history of the science of vertebrate paleontology, Zimmer discusses the career of the great British anatomist and anti-Darwinist Sir Richard Owen, focusing particularly on his struggles to decipher the mysteries of the bizarre South American lungfish.  He then goes on to more modern efforts to unearth some of the fossils that reveal the transition from lungfish to tetrapod, outlining and making sense of the many plausible and convoluted theories.  Frequently focusing on the efforts of individual paleontologists, he aptly demonstrates how challenging the topic is.

But it’s the second story that really captured my attention.  Oddly mirroring the first story in reverse, Zimmer describes the transition from a fully formed, furry, ferocious four-footed mammal to a sleek, completely aquatic dolphin in a remarkably brief 15 million years.  After discussing much of what makes the modern family of whales so remarkable, he travels back to the earliest days of mammalian evolution and display the myriad anatomical transformations necessary to accomplish this amazing feat. 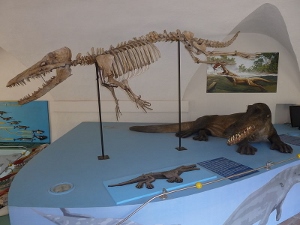 Ambulocetus, first of the whales.

By presenting these two complementary stories, the author is able to show that the traditional search for a “missing link” is more myth than reality.  Actual evolutionary transitions are so much more complicated and meandering than the linear story so frequently displayed in biology textbooks and Zimmer does a fine job of keeping the story coherent, providing a great sense of the many chaotic challenges and controversies that modern paleontologists face.

At the Water’s Edge is Zimmer’s first book and it shows why he’s gone on to become the science journalism superstar that he is today.  Since its publication in 1998, there have been additional discoveries that have further illuminated the transitions he presents here, but the book is still worth reading, both for the captivating topic and the dexterous writing.  Enthusiastically recommended for fossil and evolution buffs everywhere.