Planet of Viruses, A

What defines life?  The discussion has gone on for millennia, but ever since their discovery just over a century ago the official verdict has been that viruses – composed of only a small amount of genetic material in a tiny capsule – aren’t truly alive.  But over recent decades, it’s becoming clear that any definition of life that doesn’t include viruses may be lacking.  A Planet of Viruses – part of the World of Viruses project funded by the NIH – concisely presents why the 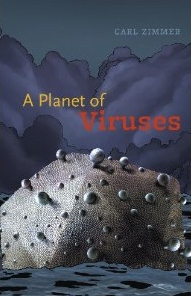 scientific view of viruses has been changing.

Dividing the svelte volume into ten essays, award winning science journalist and author Carl Zimmer provides an overview of the myriad ways that viruses play a powerful role in the natural world.  Some viruses – like the common cold, influenza and human papilloma virus – have plagued humankind for millennia, while others – like HIV and West Nile Virus – have only been known for a few decades.   Each of these human scourges is presented, including the history of their discovery, some of their disease inducing techniques and what their future may hold.

Zimmer’s discussion of these well known viruses is interesting, but what I found most fascinating was his exploration of some of the lesser known aspects of viral existence.  While everyone has first-hand experience with the runny nose induced by rhinoviruses, readers may be surprised to learn that there are viruses that prey on bacteria called bacteriophages in a constant microscopic battle.  Or you may be appalled to learn that ordinary sea water contains 100 billion viral organisms in each liter, which makes that shower after a day at the beach seem a little more important.   Lastly, as human DNA research has progressed, it’s become clear that much of our genome – that which makes us who we are – is actually of viral origin.  When viruses infect an organism they can often leave a small DNA calling card behind, potentially impacting subsequent evolution in significant ways.

While this collection of essays presents only a brief introductory overview of a complicated topic, Zimmer displays a fine balance of concision and insight, so that even a reader who already has some virological aptitude  will find it worth a read.

A Planet of Viruses provides convincing evidence that viruses play a more important role in human existence then was previously imagined, even if one ignores the awful epidemics that have killed millions over human history.  These little bits of “life” will always be with us, but with increasing knowledge and better epidemic control strategies, humanity may be able to live a little more harmoniously with them in the future.