Book vs. Movie – The Shawshank Redemption

Book vs. Movie – The Shawshank Redemption

Andy Dufresne is headed to Shawshank Prison for a murder he is sure he did not commit, though the evidence is not in his favor.  The story chronicles his time there through the eyes of his friend Red.  Andy was a banker before he was a prisoner and quietly changes the prison, his fellow inmates and even some of the toughest guards to ever patrol the lonely, hopeless grounds of the toughest prison in Maine. 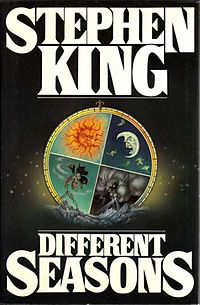 The Book is actually a novella by Stephen King called Rita Hayworth and the Shawshank Redemption that originally appeared in the compilation Different Seasons.  It’s beautifully written and is not one of King’s trademark “horror” stories.  The characters are vintage King – likable, memorable and entirely worthy of the time spent with them.  Andy and Red are the most fully developed, but even in a short novella King manages to bring the era (1920s-1960s) to life with remarkable skill.  A great novella with a great ending.  5 stars out of 5.

The Movie was released in 1994 with the understandably shortened title The Shawshank Redemption.  King books had been notoriously difficult to bring to 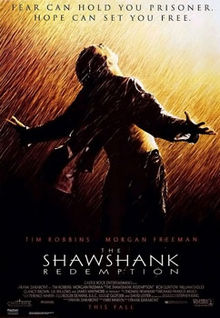 the screen; they are usually long and so full of characters and plot that no 2 hour movie could do them justice.  It wasn’t until filmmakers started adapting his shorter works that they found any success at all (with the possible exception of The Shining).  Director Frank Darabont took this to heart and set about bringing the characters, setting and remarkable story of Andy Dufresne to life and the result is stunning.  Tim Robbins embodies the beleaguered, intelligent Andy so completely that I’ll always be a little in love with him.  This film also marked the beginning of Morgan Freeman‘s long and deservedly successful career as the best provider of voice-over narration in Hollywood.  It is as gorgeous an adaptation of a piece of writing as any I’ve ever seen.  5 stars out of 5.

Once upon a time, I thought that “the book is always better”.  Then I saw Shawshank.  While Stephen King provided 5 star material, Frank Darabont elevated it with amazing visuals and picture perfect performances from his lead actors and produced a 5 star movie.  Equal stars, yes, but my gavel comes down on the side of The Movie – it’s a simply brilliant adaptation, and expansion, of the source material.

If you have to choose one, see the movie.  I’ve watched it over and over and over and whenever I happen upon it on TV I’ll watch whatever portion remains.  I’ve never re-read the novella, though I own it.  This is a DVD that I would purchase without a second thought.  If you have the opportunity, read the novella as well.  But see the movie first – the ending will give you chills.  The soundtrack is also fabulous and I’ve always longed to own the full sized movie poster of Andy in the rain.