It’s 1841 in the small town of Saratoga, New York, and Solomon Northup, a free black man, has established himself as an upstanding and honorable citizen with a loving wife and three – two in the movie – beautiful children.  It’s a day like any other when he’s approached by two businessmen from the big city who offer him work in New York City and Washington DC, which he accepts with enthusiasm not suspecting treachery.  After a few days, he finds himself drugged and in chains, captive in a basement in the nation’s capital, eventually ending up sold to a plantation owner in the rural bayou countryside of northern Louisiana.   He spends the next twelve years cut off from everything he’s ever known, subject to the most vile and sadistic abuse.  Yet somehow he maintains his pride, compassion and hope for eventual freedom. 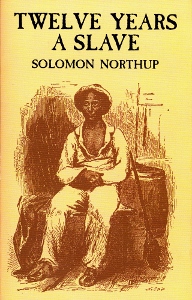 After securing his freedom in 1853 – with the help of allies back home – Northup was compelled to tell his story, which he titled 12 Years a Slave, to support the growing abolitionist movement.  Uncle Tom’s Cabin had been published the year before, giving rise to complaints that the unrestrained torture and abuse of slaves was exaggerated and embellished.   Given his direct contact with the institution of slavery – with countless scars to show for it – Northup’s eye witness account provided further support for abolition.  Using the formal prose of the time, the author writes in a straightforward and matter-of-fact style – almost as if he’s presenting testimony in court – attempting to avoid any accusations of hyperbole.   Skillfully balancing emotion and objectivity, his horrific true story makes for surprisingly gripping and heart-wrenching reading.

Released in 2013, with Steve McQueen directing the John Ridley screenplay, the movie is remarkable for its convincing 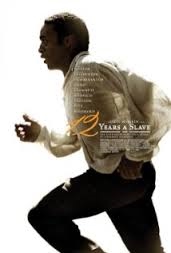 and violent portrayal of Northup’s experience.  Carried by a fantastic Chiwetal Ejiofor in the lead role and supported by several other great performances, the movie is generally true to the storyline both in fact and in spirit.  Foregoing any voice over narration – a challenge with an autobiography as source material – the movie struggles at times to maintain emotional tension or dramatic arc, choosing to emphasize the horrific torture scenes instead.

It should be a no brainer.  How can a 160 year old autobiography possibly hold its own against the 21st century cinematic industry with its veritable warehouse of emotional and technical tricks and treats for the modern viewing audience?  That’s why I had such high expectations for the movie.   Maybe too high.  With such a great story, the movie should have been even better.  But I think the movie falls short for a few reasons:

Given that it’s an autobiography, the book contains plenty of inner dialogue that was left out of the movie, leaving Ejiofor to try and convey Northup’s feelings solely with his facial expressions.  The actor does an amazing job, but I think that much of the emotion in the original work didn’t make it onto the screen.

It may seem ridiculous to say it, but I think the movie overdoes the torture scenes.  While I am convinced that the scenes represent the reality of Louisiana slavery accurately, they are so graphic that they tend to eclipse the rest of the movie, obscuring the other aspects of Northup’s heroic struggle.  The moviemakers put too much of their energy into torture, leaving the rest of the movie to languish.

Lastly, the final twenty minutes of the story were botched.  The growing drama as Northup came closer and closer to freedom – and particularly the reunion scene with his family – felt rushed and didn’t achieve the emotional payoff of the book.   After twelve years of solitude and torture, the movie finishes with only a brief whimper.

Maybe I expected too much.   Maybe the book is just too good.  But I found the book to be more dramatically compelling and riveting than the movie.  I don’t expect anyone to listen when I recommend reading such an old document, but I found it surprisingly engrossing.  The movie’s good and also recommended – mainly for Ejiofor’s performance – but given the high quality of the original source, it should have been great.