Load of Hooey, A 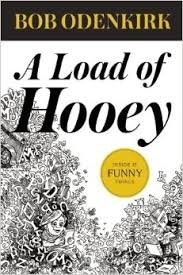 Bob Odenkirk has been around for a long time, initially as a writer for Saturday Night Live in the late 1980s, where he created the unforgettable character of Matt Foley, then as one of the co-stars on HBO’s Emmy-nominated Mr. Show with Bob and David.  But it wasn’t until 2009 in season 2 of AMC’s Breaking Bad that he finally hit it big in the role of lawyer Saul Goodman, providing comic relief for the acclaimed crime drama.  In anticipation of his next series, a Breaking Bad prequel called Better Call Saul, he’s released A Load of Hooey, an entertaining collection of comic bits and the first entry in the Odenkirk Memorial Library.

Following a distinguished photograph of the author – sporting horn-rimmed glasses, a handsome cardigan and a scarf, with an unlit pipe in one hand, a glass of red wine in the other and a unimpressed cat on his lap – the book presents 34 small bits of written comedy, mostly silly, but often very funny.  Humorous highlights include helpful advice about choosing just the right tattoo, an account of the second meeting between Jesus and Lazarus (a few months after the first) and a fictional obit for the creator of Mad Libs.  The book also includes some very funny political speeches and an assortment of famous quotes in their original (and wittier) “unabridged” versions, one of which allows the reader to know what Gandhi really meant when he talked about changing the world. 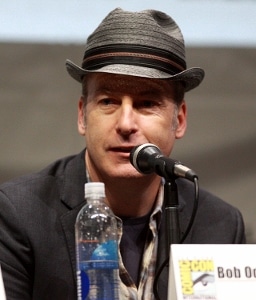 But the one piece that’s worth the price of admission all on its own is an inside look at the Beatles as they were approaching their breakup.  Revealing a previously unacknowledged dark side, Paul isn’t particularly magnanimous when he first performs his solo masterpiece, “Blackbird”, for his bandmates.  Hilarious – and entirely believable – Odenkirk’s take on their conflict is a fine example of exquisitely crafted sarcastic comedy.

I enjoyed A Load of Hooey as much as I hoped I would, but I found it oddly unbalanced with all the funniest stuff in packed into the second half of the book.  Fortunately, it’s easy to select and savor Odenkirk’s nuggets of humor in any order one chooses.  While it’s unremittingly silly from beginning to end, I can enthusiastically recommend this collection for any fans of Albuquerque’s most ethically challenged lawyer.