Heart of Everything That Is, The 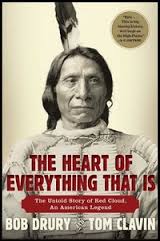 Warriors like Sitting Bull, Crazy Horse and Geronimo may still be more famous, but only one Native American leader ever brought the US Army to its knees, dictating the terms of the subsequent peace.  Born of humble means in present day Nebraska, Red Cloud grew to be a respected Sioux leader who was able to ally various Native American tribes of the northern Great Plains and defeat the US Army following the Civil War, stopping the government’s efforts to occupy the Powder River Country of north central Wyoming and southern Montana.   In The Heart of Everything That Is, historians Bob Drury and Tom Clavin tell Red Cloud’s story.

Appropriately, the authors start at the beginning, telling much of the history of the Sioux peoples and describing how they migrated from the woodlands of Minnesota to the open plains west of the Missouri River in the 18th century.  Often violently displacing other groups as they moved, they claimed much of the buffalo and antelope rich country around the Black Hills – known as Pahá Sápa in the Sioux tongue, which translates into the English title of the book.  The authors go to great lengths to dispel the idea that these skilled horsemen were all about peace and harmony until the Europeans showed up.  One would be hard pressed to find a culture more devoted to warfare than the Sioux and their arch enemies the Crow and Pawnee. 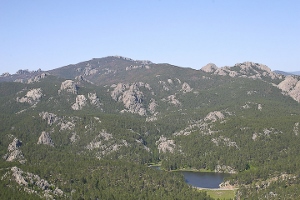 As European migrants started to push westward on the Oregon Trail, conflicts with the natives became increasingly difficult to avoid.  Attempts by the federal government in Washington, DC to “pacify” the belligerent inhabitants with treaties and trinkets were only minimally effective and following a brief interlude for the War Between the States, the American Indian Wars came to a head.  The numerous forts built and manned by the US Army in support of homesteaders, buffalo hunters and gold miners lead to such a disruption of the Plains Indian’s essential hunting traditions that Red Cloud and other leaders felt they had no choice but to defend their way of life.

While much of European side of the story has been previously well documented – with varying degrees of accuracy – Drury and Clavin base much of this book on a recently re-discovered Red Cloud auto-biography, allowing them to view events from the Sioux leader’s perspective and explain how he was successful in his uniquely sophisticated battle against the US.  The authors do a fine job of piecing together countless sources into an intelligible and entertaining whole, particularly when it comes to their highly detailed analyses of the numerous battle scenes.

Providing an absorbing look into the remarkable life of a Native American hero, The Heart of Everything That Is is a well written and balanced look at a tumultuous time in US history.  I can enthusiastically recommend it for American history buffs, both those who are interested in the history of Westward Expansion or those who want to learn about this particular episode in the tragic tale of North American genocide.