Art of Drowning, The

No Lifeguard on Duty…

Although I’m working on it, figuring that it’s an appropriate part of any self-improvement program, I’ve never been much of a poetry reader.  I expect I’m with the majority in that my exposure to poetry in high school and college only served to solidify my complete lack of interest.  If I ignored it, maybe it would 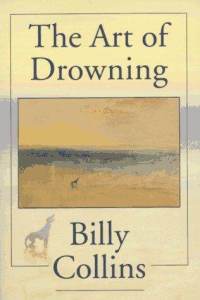 just go away.  But perhaps my advancing age has softened my brain matter a bit, because it appears that a small kernel of poetry appreciation has taken root in said matter.  I can truthfully say that I have a favorite poet and his name is Billy Collins.  I read his most recent work, Horoscopes for the Dead, and it enjoyed it so much that I went back to find an older work called The Art of Drowning and found it almost as entertaining.

Collins has been publishing poetry for more than three decades, winning numerous awards and serving as US Poet Laureate from 2001-2003.  He writes in a deceptively simple, friendly, down-to-earth style that’s often acclaimed for its humor, but I find that it can also be quite moving in a quiet sort of way.

This collection, published in 1995, presents 49 short poems that cover a wide array of topics.  Collins explores the first inkling of mortality on his tenth birthday; reminisces on his favorite cigarettes, years after quitting; and honors Adolphe Sax, inventor of the saxophone.  In one of my favorite poems, he ponders what it was like for the first human to experience a dream.   Despite a frequently light hearted approach, Collins doesn’t hesitate to weigh in on the deepest of topics, like how he wants to die.

Many of his poems are funny and if I was going to recommend particular poems, that would be where I would start.  But they aren’t all funny and it seems like Collins understands how to dexterously dose the humor throughout the collection, using just the right formula to keep the reader guessing.  At the start of his poems, he doesn’t give anything away, either in the title or the first few stanzas, creating a tension that I really find quite surprising.  As the poem proceeds, there’s no way to know if he’s going to take a playful turn or choose to ruminate on a more fragile existential theme.   Sometimes he manages to do both in the same poem, which is why I find his work so fascinating.

You may have never felt the need to read a Zen poem about the accidental death of composer Josef Strauss, but you may be surprised how memorable such an experience can prove to be.  Despite their deceptive simplicity, the poems in The Art of Drowning convincingly display why Collins has received so much acclaim, each one packing considerable power into just a page or two.   The book is truly a marvel of concision.  I strongly recommend it, particularly for those who don’t think they like poetry.