What happens to us when we die?  I’m not talking about heaven, hell or some other kind of afterlife; I’m talking about what happens to our bodies, our flesh and bones.  For millennia, humans have struggled to disrupt the normal decomposition that follows death, whether through embalmment, burial, cremation 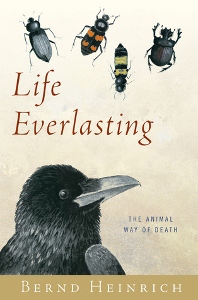 or mummification.  In recent years, however, there’s been a growing movement in favor of “green” burials that eschew all the technological trappings of mortuary science, allowing one’s body to naturally return to the ecosystem of which we’re all a part.  Prompted by a friend’s request for a burial on his large acreage of woodland wilderness in Maine, scientist and author Bernd Heinrich explores this fascinating topic in Life Everlasting.

Starting right in his backyard, Heinrich initiates a first-hand exploration of what natural decomposition really entails.  Starting with dead mice and moving on to deer and other road kill, he meets the wide cast of characters who play a role in breaking a carcass down to its most elemental particles.   From carrion beetles and botflies to ravens and coyotes, he tells the wonderfully complex stories of these essential creatures.

Next, he moves on to other ecosystems, devoting an entire chapter to the many varieties of vulture and condor, which are gradually becoming scarce as the big game animals they rely on disappear.  Other topics include the role prehistoric humans played as scavengers, the slow death and decomposition of trees and how an entire biological industry has evolved to recycle massive whale carcasses after they settle on the bottom of the ocean.  He even rolls up his sleeves and gets messy with elephant dung beetles, one of the most important recyclers on the African plains.

I’ve been an enthusiastic Heinrich fan for years and this book lives up to his high standards.  He does an excellent job of combining hard science with his own personal story, but the thing I like most is that he likes to get his hands dirty 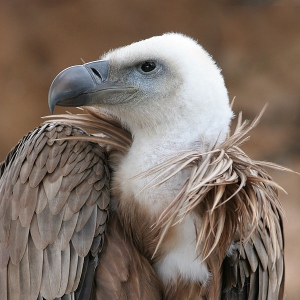 One of the protagonists, a griffon vulture.

and perform much of the science himself.   At one point he’s had a deer carcass lying on the ground for days, the weather’s been warm and it’s so completely covered with maggots that the ravens and coyotes are no longer interested.  He’s looking for carrion beetles, which he suspects are working underneath the carcass:

“To find out if my suspicion was correct, I had to turn the deer over.  It was difficult to do without gagging.  But it was worth it.”

“Elephant dung is very coarse compared to any other dung I have ever seen, smelled or felt.”

Life Everlasting tackles the ignored half of biology, the scavengers and decomposers, which provide the building blocks for the subsequent generation of life and without which all ecosystems would come grinding to a halt.  At age 72, Heinrich is still going strong with his inimitable and awe inspiring approach to science and he has the writing skill to provide consistent entertainment for anyone with an interest in biology or ecology.   He also provides unique and thoughtful commentary for anyone pondering their plans for a final resting place.