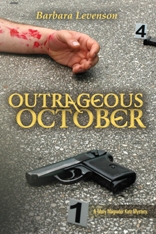 Mary Magruder Katz is a Miami-based criminal defense attorney.  She runs her own successful practice and goes home at night to handsome fiancé Carlos, a local businessman.  Until Outrageous October, that is.  Carlos has a large and complicated family and Mary has spotted him in a compromising position.

Instead of facing him, Mary decides to cut and run.  She heads north to the family home of her friend, Lucy, in High Pines, Vermont.  Being outgoing in a small town means making friends quickly.  Especially in a place where half the population was already expecting you.  Mary finds herself involved with a local attorney, an unsolved year-old murder case and an oddball property dispute between neighbors.  Throw in the disappearance of an acquaintance from an old case and you have the never-a-dull-moment life of Mary Magruder Katz.

Outrageous October is part of a series written by Barbara Levenson.  I haven’t read the previous books, but pertinent details are filled in well enough for the book to stand alone, particularly as it takes place far away from the main character’s home base.  Mary is well developed as a character, though I did not find her particularly likable.  She behaves like an out of control petulant child in her dealings with Carlos and seesaws between mundane and uncomfortably pushy throughout the rest of Outrageous October.

My biggest problem with the book is that the writing lacks depth or elegance, reducing it to little more than plot and character sketches.  Levenson has a tendency to overlook details like repetitive adjective usage among her characters, using the same slangy phrases for multiple people.  It leaves them without strong unique voices and leaves us with a lot of short, simple sentences and repeated words and phrases.  The book also happens to be absolutely filled with inexplicable punctuation errors – sometimes to the point of being difficult to decipher.  For this I place blame directly on the publisher – editors exist for a reason.  So do proofreaders.  So does Microsoft Word.  None of these seem to have taken even a passing glance at Outrageous October.

Overall, this very average character and plot is sunk by pedestrian writing and a pathetic inattention to even the most basic grammatical details.  1 star out of 5 for Outrageous October.