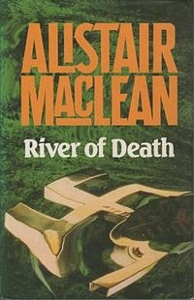 El Dorado or The Lost City of Gold has been part of our mythology ever since Columbus and his gold hungry Spaniards first arrived in the New World.  In the modern era, rational folks have generally conceded that these stories are the result of too much wishful thinking and too much rum.  But such myths die hard and John Hamilton has spent most of his life searching for the inestimable wealth that he thinks is hidden in the remote tropical forests of southern Brazil.  One of the later works in novelist Alistair MacLean’s testosterone laden oeuvre, River of Death tells how even the best laid plans can get pretty complicated.

Right off the bat, we learn that our hero Hamilton is an impressively sophisticated genius, who is unfazed by anything the deep dark jungle can throw at him.   He can also handle an incredible volume of hard liquor.  His years of research have given him a vast trove of knowledge regarding the plants, animals and native humans that stand in his way.  Unfortunately, he’s not the only one searching for the City of Gold.   Multibillionaire Joshua Smith is obsessed with the idea and will stop at nothing in pursuit of this dream.  Once he and his henchmen get wind of the fact that Hamilton is close to the goal, they make sure Smith gains the upper hand and make Hamilton an offer he can’t refuse.

After these complicated negotiations are completed, accompanied by plenty of booze, Hamilton and Smith, along with a small army of ill-tempered subordinates head into the forest to find their fortune.  Unfortunately, their efforts are complicated by a litany of hurdles.  From river rapids, mechanical mishaps, piranhas, wild boars, snakes, cannibals and numerous poison tipped blow darts, the search team escapes one contrived suspense laden obstacle after another. 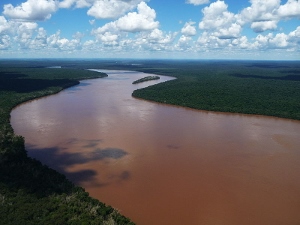 The Iguazu River in southern Brazil.

While the story moves right along and includes a few twists and turns, I really didn’t find it very compelling.  MacLean – best known for The Guns of Navarone – writes with so much machismo you can almost smell it, but the story and characters are simplistic and uninteresting.  Sort of like a Hardy Boys novel for adults, but not as entertaining.  There’s not even any sex.

I’ve never read anything by MacLean before and River of Death is likely my first and last experience with the author, although his earlier works appear to have gained more critical acclaim.  Maybe the book simply hasn’t aged well, but I suspect it wasn’t much good in 1981 either.   Even his effort to weave some Nazis into the story falls pretty flat.  A disappointing two stars for this one.

This books appears to be (wisely) out of print.   The Guns of Navarone, published in 1957 to critical acclaim, is a better choice.