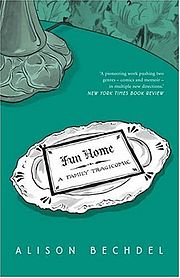 I was a skeptic.  I didn’t really think that the graphic novel genre was capable of being anything more than a lengthy comic book, focusing on superheroes, zombies or some other fantasy.   For this reason, I’d avoided graphic books of all kinds entirely.  But then I picked up Fun Home – a graphic memoir by acclaimed cartoonist Alison Bechdel – and I realized the error of my ways.

In Fun Home, the author – most famous for her comic strip Dykes to Watch Out For – tells of her life in small town Pennsylvania, growing up with two brothers and her unhappily married parents in a large gothic revival house.   Her early childhood was darkly shaped by the creepy aging mansion, her sarcastic mother, her distant father and the family owned funeral home (aka Fun Home) that they ran.

Bechdel focuses much of the story on her slowly emerging lesbian sexuality – coincident with the birth of the gay rights movement – with plenty of awkward humor, referring to her childhood diary frequently.  During her teen years, she gradually develops a deeper relationship with her father, a man with plenty of his own conflicts and secrets.  When he wasn’t teaching English at the local high school, attending to grieving clients at the funeral home, meticulously redecorating the house or laboring in his spacious garden, he was sneaking off to have sex with some of his male students.    While it wasn’t until years later that Bechdel learned about his illicit acts, the destructive effect that his behavior had on the family is evident throughout the book.  She traces the intersecting arcs of her coming of age and her father’s increasingly desperate behaviors with dramatic skill, bringing the story to a heart rending conclusion.

Bechdel skills as a writer and storyteller are on fine display here, but her drawings are an equally powerful part of the book.  As a graphic book novice, I expected the artwork to simply illustrate the action of the story, but she accomplishes much more than that, using her drawings to add emotional resonance to the work as well as some essential comic relief. 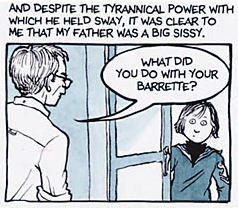 To be honest, the only reason I read this book is because I came across an article that expressed outrage that a book about “a lesbian and a child molester” was required reading for freshmen at the local college.  Aside from the fact that – based on his article – it was pretty clear the columnist hadn’t read the book, I was amazed at how delicate he thinks college freshmen are.   Yes, there is a very tame lesbian sex scene and even a masturbation scene or two, but the idea that these could have any shock potential for full grown adults is actually hilarious.  I think the underlying reason for the efforts to ban this book and books like it is that if lesbians – or gay men – are allowed to tell their story, students or other people might realize that it’s “normal” to be gay – or straight or whatever.  Thankfully, most college students already know this, but the Christian Right doesn’t seem to be ready to give up any time soon.

In my opinion, this thoughtful and inspired work is a great addition to any college or senior high school reading list.   The challenges the author faces are probably quite similar to those faced by young adults everywhere, regardless of sexuality.    In case you’re still worried, the book doesn’t glorify homosexuality or child molestation.  It doesn’t glorify anything.  It’s just a woman’s story.

In the end, Fun Home is everything a memoir should be.   It’s an engrossing, funny, thought provoking and remarkably entertaining read in a genre that is no longer limited to comic book characters.    The fact that it’s a frequently banned and challenged book is all the more reason to check it out.   Highly recommended.