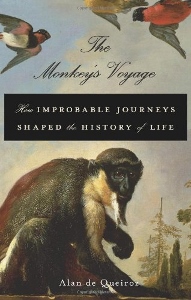 Scholars have been studying human history for millennia, recognizing that to understand the present, one must know the past.  The same is true in biology.  Ever since Darwin transformed biology into a historical science, researchers have been trying to decipher the history of life.  Once life developed – a substantial puzzle on its own – how did the myriad life forms colonize the Earth’s various environments?  The specific questions one might ask are endless.  Why do penguins only live in the Southern Hemisphere?  Why do kangaroos live only in Australia?  How did spiders get to Hawaii?  Prior to Darwin, naturalists assumed that following the great flood God placed species in places that best suited them, but as they looked more closely, they realized that this explanation was lacking in too many ways.   Out of these efforts, the field of biogeography was born, which strives to explain why plants and animals live where they do.  In The Monkey’s Voyage, biologist Alan de Queiroz tells how two centuries of heated academic battles and numerous recent advances have helped scientists begin to confidently answer many of the mysteries surrounding the history of life on Earth.

De Queiroz, a biology professor at the University of Nevada-Reno, spends much of his time studying garter snakes.  But in this book, he broadens his scope to encompass the entire planet and explains how there have been two main arguments used to explain the distribution of life.  Either species spread by their own efforts, gradually moving overland into new territory or possibly flying, floating or swimming to new continents or islands.  Darwin went to great efforts to try and experimentally prove that seeds could still germinate after spending a few months soaking in sea water or that snails could hitch a ride to distant lands by clinging to a duck’s feet.  The second idea was that the Earth itself could move species, either via temporary islands and land bridges or by wholesale continental drift – an idea that gained many more adherents once the theory of plate tectonics became widely accepted in the 1950s and 60s. 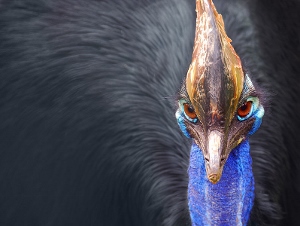 The Southern Cassowary, close relative of the emu and the kiwi.

The author goes on to explain how for decades, the sex appeal of continental drift – with the exotic “lost” lands of Pangea and Gondwana – proved too irresistible and biogeographers assumed that the movement of Earth’s land masses was responsible for most of the plant and animal distributions we see today.  When one looks at a 300 pound ostrich, it’s hard to imagine that its ancestor somehow traveled overseas to become the rhea in South America and the emu in Australia.  The fact that these three continents were all previously part of Gondwana in the past is a very simple explanation of why these three species live where they do.

But over the past twenty years, with more accurate geologic data, extensive DNA databases and advances in taxonomy – in particular the “molecular clock”, which analyzes DNA changes to provide dates for the various branches on the tree of life – the “just so stories” from ancient Gondwana have started to develop some major flaws.  Maybe this massive geologic and biologic puzzle’s been put together wrong.  De Queiroz skillfully weaves his way through this complicated story with a steady hand, consistently providing clarity, balance and illumination.  It’s some of the finest science writing I’ve read in quite some time. 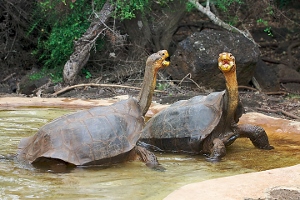 The book is at its best when it’s revealing how science really works.  How theories are born, thrive and fade, either after being modified into an improved theory or after being mercifully euthanized.  Many scientists are stubborn, carrying their discredited theories with them to the grave, but de Queiroz features some who have been flexible enough to completely change their minds once the evidence against their theory becomes convincing, even when such changes can have a significant impact on their career.

Full of inspirational stories of adventure – featuring intrepid scientists, as well as frogs, skinks and carnivorous plants – The Monkey’s Voyage is science writing at its best.  De Queiroz tells a riveting story of scientific struggle and conflict, while simultaneously revealing the vast history of the natural world.  Strongly recommended for anyone who’s interested in the history of science or who revels in deciphering the puzzles of the ancient past.