Man in the Brown Suit, The 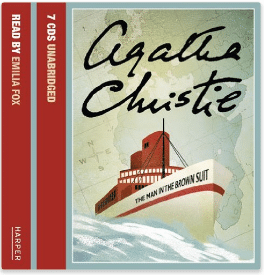 Not the Traditional Christie: A Peppy 1920s Thriller

Anne Beddingfeld, young, impressionable, erratic, and deeply romantic in that danger seeking, 1920s flapper sort of way (with all the accoutrements of shopping, diamonds, murderous men, and voyages to the far away) is not your typical Agatha Christie heroine. Less of a sleuth and more of a thrill seeker, Anne doesn’t want to end up a secretary, but instead wants to poke around in something bloody and mysterious. She gets her chance when she spends her last £87, left by her dead and not-so-missed father, on a boat ticket to South Africa. On shipboard she gets involved with a mystery involving murder, faked identities, stolen diamonds, organized crime, Russian dancers, and wooden giraffes. More importantly, she finds an imposing, violent brute of a man who would make the most ducky husband and in true Anne fashion, she falls devilishly in love with the rake who just might be a killer.

Meanwhile as Anne discovers love and drama on the high seas, Sir Eustace, a cantankerous old gentlemen sailing with them, bemoans his fate in everything from secretaries to travel companions, providing some delightful comedic relief and keeping the already exuberant tale thoroughly upbeat.

If you’re come to The Man in the Brown Suit looking for the usual Christie fare, for example the sanguine sleuthing of Miss Marple, you won’t find it here. Picking up the audio book edition of this tale to share with my boyfriend on a road trip, I was both disappointed and oddly charmed. It’s not a great introduction to Christie in that it’s not her typical style and approach. Yet the humor and verve of the characters are addicting; my boyfriend (unaware of the usual Christie’ seriousness) became immersed in a peppy 20s thriller. Following as it did on a likewise peculiar Christie collection devoted to her romance stories, he now has a very different perception of Christie from the norm. She’s a multifaceted author and while these dynamic tales, deliberately overdone, are charming, I’m glad that they don’t represent her full repertoire of mystery writing.

The perpetrator of this mystery and the continual casting and shifting of suspicion builds on Anne’s vivacity and leaves readers guessing and more than a little wary of Anne’s chosen suitor. Between worrying over our flighty narrator and trying to tackle the mystery of the underworld’s famous Colonel, readers are involved in the narrative from multiple angles (and story lines). It’s fun, and fluid, and a tad confusing. Ok, a lot confusing. The mystery is layered on main plot lines, sub plot lines, and plot lines shanghaied by Anne’s desire for a dangerous romance. But it’s fun and the grand giveaway keeps with the cheery nature of the tale while remaining fully alluring and completely unpredictable. That’s a girl, Christie!

My particular audiobook version is read by Emilia Fox whose gorgeous voice with its British accent delights audiences. She keeps pace with the energy of the narrative and brings each character alive, modifying her voice to perfection. Her reading is one of the best elements of this novel, and she truly embodies the characters that she portrays. Highly recommended.