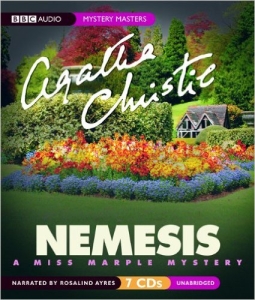 Miss Marple is back to solve one final mystery, this time in response to a summons received from beyond the grave. Technically the last Miss Marple book written by Christie (although Sleeping Murder, my personal favorite, was published later) this last hurray for elderly detective and purveyor of stories is a satisfying, if not stellar conclusion to a career of crime solving and crocheting. Mr. Jason Rafiel (a previous character from one of the Caribbean Mysteries) has died and in his will left a codicil and a riddle for the inimitable Marple. If she can solve an unknown crime with seemingly no pointers from Rafiel or associates, she will be bequeathed a £20,000 legacy. The temptation here is not the money, but the very mystery of the request itself. What could this crime, this long ago evil be, and how can Miss Marple figure out what direction to go in. With a little help from beyond the grave and a few hapless associates, Miss Marple sets out to solve her final mystery discovering a long ago murder, a young woman named Verity, and the savage truth about Mr. Rafiel’s raffish son.

Meandering and yet titillating at the same time, Nemesis is a dual, perhaps even a triple mystery with the first question being: just what exactly is the mystery. Building an unlikely scenario, crafted with almost supernatural foreknowledge and some amazing coincidences, Miss Marple blindly follows the allure of crime, putting pieces together in a puzzle that, ultimately, is given to her and to us. It’s an ambitious attempt, to make a mystery out of a mystery and then follow the convoluted discoveries from there, and it works, with caveats. A certain suspension of belief, a certain nod in the elderly Miss Marple’s direction, a certain forbearance of coincidence and shaky plot details allows readers to have fun with the sinister atmosphere. It’s nowhere near Sleeping Murder or The Body in the Library but it’s an enjoyable excavation of secrets long buried and the disfiguring qualities of great evil, and Miss Marple is just as spunky as always. Her final confrontation even involves confession and quiet crocheting all while wearing an unshakable façade when confronted by a ruthless, senseless killer.

If you haven’t read the Caribbean mystery introducing Mr. Rafiel (guilty) then you needn’t worry. The backbone of the story is well founded and explanations allow first time readers to sink right in without knowledge of prior adventures. Miss Marple’s character, internal monologue, and sleuthing skills reveal right away who she is and her actions and reactions draw old fans into a familiar world and introduce new readers into the half dark, half cozy world of Christie, crime, and elderly lady sleuths.

The setup and premise, as I’ve already mentioned, is especially ambitious and readers almost get a sense of the author’s exhaustion toward the end, where the mystery is revealed more than discovered. This makes the narrative, a slow starter and quick ender, feel weighted and choppy, not exactly first draft status but certainly not final draft ready – yet readers are quick to forgive. This novel was published late in Christie’s career and even old reviews from back in the day state “not the best” yet go easily and lightly on this last Marple adventure. Christie and Miss Marple have long since earned their beloved status and if this isn’t the most inspiring Christie mystery, it’s not the most disappointing either. Even non-fans, while noticing some of the flaws, should enjoy the mystery and the moments of brilliance which shine through like unpolished gems. Recommended.

The audio book version, which I listened to during countless commuting hours, as read by Rosalind Ayres takes the experience to a new level and creates characters and atmosphere through voice and tone. Ayres captures the usual meek, refined old-lady tones of Miss Marple and uses this seemingly innocuous voice to craft great adventures, launching readers into the world of one of fiction’s favorite investigators.