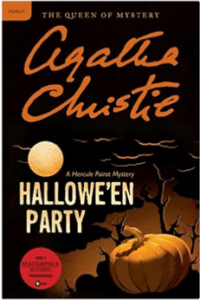 It started by seeking some Halloween themed thrills and chills back in October and now, here it is, almost the New Year, and my long-suffering boyfriend and I have just finished a tiring, months-long epic slog through Agatha Christie’s Hallowe’en Party. We didn’t even get to the seasonal Christmas themed mystery we had set aside, stuck instead with some faded spooks, a tired plot, and a grumpy Christie.

I discovered Christie years ago, starting off with Miss Marple and became enthralled by the maze like structure of the narrative, the complicated plot threads twisting and interweaving around stunningly real characters in an austere yet atmospheric English setting. Introducing my boyfriend to Christie seemed like a synch, and we both enjoyed our first Poirot together, Murder on the Orient Express. And then . . . then there was this novel.

Written much later in her career and published in 1969 Hallowe’en Party, ironically unlike Christie’s older works, feels exceptionally dated. The narrative begins when the young child Joyce, aged 13, attempting to impress illustrious mystery writer Ariadne Oliver at a children’s Halloween Party, claims to have seen a murder. The brag backfires and after the festivities, Joyce is found drowned in the apple bobbing bucket.  At the behest of a distraught Mrs. Oliver, Poirot attempts to investigate, but becomes distracted and enmeshed in “kids these days” arguments and an excessive amount of sudden garden descriptions. The wily detective seems more down and out than intrigued by the possibility of a forgery, double-murder, triple murder, potential accident, missing-persons, kids these days, broken vases, old books cases, and the random ritualistic. Whew, what a mouthful.

The narrative, while the usual length, does not have Christie’s typical concise brevity, her ability to cut through the weeds and get to the pulsing heart of the matter. Instead, everything meanders, usually in giant sloughs of stilted dialogue. When the story does remember to come full-circle, the emotions are base and comically drawn. Joyce’s death elicits the same response from one and all, including close family and friends, being roughly “oh, she was a rotten child and liar.” A child is dead, yet the reaction is universal but seemingly unfounded antipathy, which I suppose just gets to the rottenness of those long-haired kids these days (i.e. the unfortunate “children” of the 70s who caused so much disapproval from the leading dame of mystery).

Limping along, a short novel becomes a quagmire of unrelated chapters, the rich atmosphere of the beginning dissipating to something exhausted, slow, and just plain lost. Our initial delight at a seasonal read soon transformed into a duty, which we often accidentally/on-purpose forgot to read. When we did read, our usual insatiable desire for chapter after chapter was cut to the one obligatory, darn-it-we-haven’t-read-this-thing-in-ages chapter. Very unusual for anything related to Christie and for a potential double-murder mystery as well.

The clues never fitted together, the plot threads ambled along independently, red-herrings were thrown into the mix, and finally the conclusion landed like an injured an exhausted bird – in a heap of dust and dejection. A conclusion which must be from another book, because the sudden addition of a brand new story complimented by a forced occult theme does not follow any of the patterns established in the investigation or hinted at by the clues. The ending leaves readers simply breathless – breathless with irritation. What was that? Was there a misprint at the factory where suddenly another book’s ending got printed at the conclusion of this one’s and no one noticed (probably because no one read it this far.) But hey, at least none of the references to the long-haired kids these days were left out . . . or any of the numerous editing errors, run-on sentences, dangling modifies, and general stilted descriptions and dialogue.

Agatha Christie is the undisputed master of the modern mystery and with such a perfect reputation and so many exquisite books under her literary belt, I suppose one complete failure of a novel must be ignored, even forgiven, especially since it was preceded with By the Pricking of My Thumbs which is one of my personal favorite Christie mysteries. For the die-hard fans only, pick up Hallowe’en Party when you’ve finished all other Christie offerings first, and prepare to be disappointed.