By The Pricking of My Thumbs 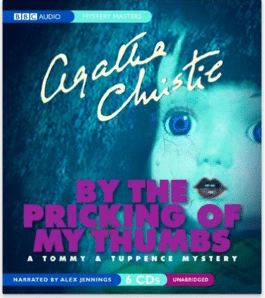 Friendly witches, houses riddled with secret passageways, fireplace flues blocked by old, abandoned children’s toys, and a series of long-ago but never forgotten child murders imbue By the Pricking of My Thumbs with a sinister, addictive atmosphere. Strangely cozy at the same time as it is chilling, this Agatha Christie offering, written later in her life, is a dark mystery for the husband and wife duo – Tommy and Tuppence. Beginning with a dismal visit to the nursing home to see Tommy’s cantankerous aunt, Tuppence discovers a lonely old lady, a picture, and the unremitting intrigue of an unsolved mystery. Populated with quaint antique houses, musty village gossip, and a last hurray for the overly independent Tuppence, By the Pricking of My Thumbs combines classic, gothic horror with hard boiled sleuthing and even the odd dosage of humor. It’s Christie at her most serious and best.

Intrigued by a love of Christie’s Miss Marple and Poirot mysteries, discovering this little gem at the library, I decided that it was time to branch into even more Christie series. The darkest mystery is ironically the last, as this is the final volume of the Tommy and Tuppence series (published in 1968). Yet, something about the style, the vivacity, and the attention to serpentine details and plot twists evokes Christie’s early career. It’s the most effective way to finish a series with a flourish and, oddly, a good introduction for readers either new to Christie or to Tommy and Tuppence (as I was.)

Tommy and Tuppence, former sleuths/spies are now kicking into low gear as they shift into a more quiet time in their older age. Tuppence, however, does not feel like letting go of the verve of adventure and when an opportunity strangely presents itself, she follows the clues to a decades old mystery. When the nursing home reports that the old lady Tuppence met has disappeared, taken by suspicious relatives and moved to a place with no forwarding address, Tuppence follows the string of seemingly unrelated clues to the strangely enigmatic village of Sutton Chancellor. Tuppence strikes out on her own, discovering a gory history of inexplicable child murders and the gloomy house which remains the only clue to the murderer and the connected disappearance of Mrs. Lancaster. Determined to rescue the mild old lady, solve the murders, and identify the strange element in the painting, Tuppence encounters violence and madness beyond her darkest fears. When Tuppence too disappears, the disgruntled and worried Tommy must solve the mystery to locate his wife, before it is too late.

Weighing in at roughly 300 pages (that’s around nine audio CDs) the story moves quickly but is not as pared down as Christie’s usual fare. Instead, she allows readers to enjoy the atmosphere and contemplate all of the possibilities and the interconnectedness between the three central elements (house, painting, Mrs. Lancaster). Tuppence only has intuition and a painting to begin her journey, and this means that the narrative spends less time examining potential clues than it does building a rich surroundings which eventually yields potential suspects and past uses of the now bisected home displayed originally in Tuppence’s discovered painting. This creates an immersive experience that readers feel, tensing ever more as the story progresses and the ominous threads begin to weave, noose like, around our unsuspecting heroine. The sudden removal of Tuppence from the tale at a critical moment amplifies the reader’s anxiety on both her and Tommy’s behalf, making the pages fly.

The mystery itself is unfathomable to all but the most adroit, of which I was not one. This leads to a believable albeit shocking conclusion with the usual confrontation and explanation. Perusing through the book a second time, readers can see the trail of clues, the intimations, the suggestions and recognize the coming revelations, but the first time around, prepare to be surprised (unless you’re a genius and somehow figure out the mystery early). The characters’ internal dialogue and escalating emotions translate through the words, enmeshing readers in a fraught situation. Tommy and Tuppence are real, relatable, and above all, fragile in their dangerous predicament, leading readers to bond with the characters just as we fear for their lives and both anticipate and dread the mystery’s key revelations. Highly recommended.

*A Note on Edition: On a long car trip to visit the boyfriend’s parents for the holidays, I listed to the audio edition as read by Hugh Fraser for By the Pricking of My Thumbs. Fraser’s reading is both appropriately sinister, exceptionally British, and an all-around perfect fit for the inner workings of Tommy and Tuppence’s minds and their escalating emotions. Capturing the narrative in both atmosphere and tone, the reading takes this novel to the next level and transforms it from a drama to a true performance.