What’s in your recycling bin? 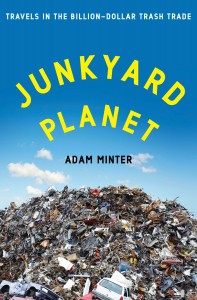 In the past decade or two, as humanity’s impact on the environment has become increasingly worrisome, Americans’ enthusiasm for recycling has blossomed, taking on an almost moral flavor.  While we all know that it’s important to recycle our old People magazines and empty SPAM tins, does anybody really know what happens to all that stuff?  When I throw an empty cardboard Franzia box or a drained Dos Equis bottle in my recycling bin, where does it go?  What about my defunct iPod or my old lawn mower?  Who takes care of this stuff and what do they do with it?  In Junkyard Planet, journalist Adam Minter tries to answer these kinds of questions.  He’s quite successful, I should add, although my righteous sense of moral recycling rectitude has suffered a bit of blow in the process.

Raised by a family of scrap dealers in the outskirts of Minneapolis, Minter has been around other people’s junk his entire life and not surprisingly, it’s warped him a bit.  But rather than go into the business himself, he chose to become the world’s first “scrap journalist”, writing for numerous garbage industry and mainstream publications after moving to a new home base in Shanghai.  While it shouldn’t have surprised me, given that it’s currently home to more than 1.3 billion people, it turns out that China is the center of the recycling universe. 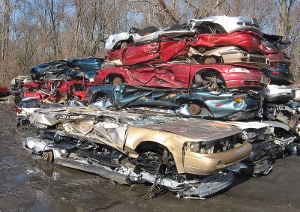 Crushed cars in a Maryland junkyard.

Home to the fastest growing economy in the world – although things have slowed a bit since the 2008 worldwide economic bust – China is in desperate need of raw materials.  Rather than dig iron and copper ores out of the ground or produce virgin plastic from petroleum, the Chinese have sought out more easily accessible resources on the other side of the Pacific, where piles of unwanted metal, paper, plastic and electronics are readily available, having been cast off by the most massive consumer culture in the history of the world, the good old U S of A.  Surprisingly, thanks to cheap labor and relatively inexpensive shipping costs – a result of our massive trade imbalance – American garbage is a valuable commodity in China and many a fortune has been made by taking advantage of that fact.

Calling on his many industry connections, Minter takes the reader on a behind the scenes tour of some of China’s hottest recycling locations.  From a factory in Shijiao, where they process 2.2 million pounds of American Christmas tree lights every year, to Wen’an in the outskirts of Beijing  – quite possibly the most horrifically polluted place on earth – where they recycle every kind of plastic ever conceived, to Guiyu where they manage to collect five tons of gold every year from discarded American electronics.  In case you were wondering, you’ve got to melt about 7 quadrillion computer chips to collect an ounce or two of gold. 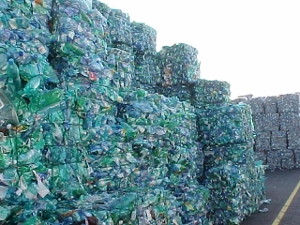 Minter also explores the American side of the story, spending time on the road with his favorite Chinese buyers, as they compete to ship high quality scrap back home.  In addition, he tours some of the relatively more mechanized recycling plants in the United States, one of the highlights being a visit to a car shredder, ingeniously designed to violently hack scrap automobiles into tiny recyclable bits.  Remarkably, the bizarre contraption can even collect any spare change hidden in the seats.

Interspersed amongst his international junkyard field trips, Minter tells much about his own scrap story, fondly reminiscing about the good times as a youngster, buying and selling scrap with his grandma at the family junkyard.  This personal touch adds a nice balance to his wide ranging adventures and helps explain his unusual obsession with the world of scrap.

Well written and researched and told with plenty of wit and enthusiasm, Junkyard Planet reveals a darker side to the recycling story, showing that economics and demand for commodities are what really drive the business, rather than green benevolence and altruism.  Recommended for anyone who’s interested in what happens to their trash after it’s loaded on the garbage truck.  Minter provides a cold splash of reality and convincingly makes the point that recycling will never be the whole answer to the handling of our scarce resources.  Reducing consumption – especially as India and China’s middle classes grow – and reusing products – from old electric motors to elderly computer chips – will continue to be more important.  Reduce, reuse, then recycle.