You Will Not Have My Hate

Love and defiance in the wake of terror 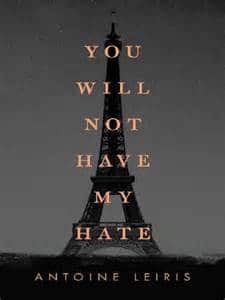 Antoine Leiris’ You Will Not Have My Hate is perhaps the most unforgettable memoir I have ever read.

This haunting book manages to be weighty, devastating and gorgeously written in just 129 pages. In fact, I finished it in one sitting because I was unable to tear myself away from Leiris’ words until I knew he was going to be all right at the end.

You Will Not Have My Hate started as a Facebook post Leiris wrote three days after his wife, Hélène, was killed at the Bataclan concert hall during the November 13, 2015 Paris terror attacks. Although gutted with grief, Leiris was somehow—astonishingly—able to pick through the rubble of his life and share a few words with the terrorists responsible: “On Friday night, you stole the life of an exceptional being, the love of my life, the mother of my son, but you will not have my hate… There are only two of us—my son and myself—but we are stronger than all the armies of the world. Anyway, I don’t have any more time to waste on you, as I must go to see Melvil, who is just waking up from his nap. He is only seventeen months old… You will not have his hate either.”

The act of writing became Leiris’ salvation: he took his Facebook post and expanded on it, ultimately publishing his memoir within a year of Hélène’s death. This feat alone makes You Will Not Have My Hate a five-star book—but more than that, his meditations on loss and fatherhood are fully and deeply formed, offering a measure of hope during frightening times.

Some of the scenes are difficult to read, like when Leiris explains what it’s like to identify his wife’s body at the morgue. But he goes beyond the bloodshed, describing moments such as clipping his son’s fingernails for the first time, and greeting the electric meter man at the front door. The reader is as jarred as he is by these small invasions of reality; we cry a little, we laugh a little, we scratch our heads at the senselessness of it all.

There is so much animosity in our world right now, but Leiris will not stoop to it. His wants his grief to remain pure, which means he won’t allow hatred to distract him or give him a way to avoid his suffering. However, he does make it clear that absolution is not on the table: “I forgive nothing, I forget nothing. I am not getting over anything.” Everything Leiris says is perfect and right; I am amazed that he was able to muster up the concentration to organize his thoughts so carefully.

Bearing witness to Leiris’ anguish is not easy, but I feel like it’s my duty as a global citizen to listen to his story. Clearly, terrorism eviscerates a family—Leiris’ is no exception—but he has a remarkable ability to keep putting one foot in front of the other, establishing order and courage for Melvil’s sake: “With a burst of machine gun fire, they shattered our puzzle. And after we have put it back together, piece by piece, it will no longer be the same. There will be someone missing in the picture, there will be only the two of us, but we will take up the whole picture.”

Leiris’ memoir is no substitute for Hélène, but it serves as an exquisite gift to his son—and to the rest of humanity.