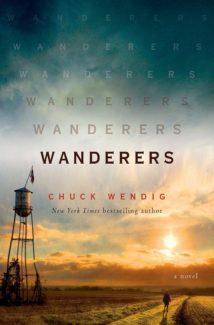 Some who wander are actually lost

Have you ever known a sleepwalker? Or someone with night terrors? It’s a really interesting, and sometimes freaky, phenomenon. The way they look right through you, clearly are not awake, yet manage to navigate their environment is both amazing and unnerving. Now imagine that times 1000. That’s the stuff good, juicy, horror novel nightmares are made of. Welcome to the world of Wanderers, by Chuck Wendig.

The story begins as such stories must – with the first walker. Vanessa is a teenager who simply walks out of her house one day. She takes nothing, tells no one, she just walks away. Her sister Shana chases her down and tries to wake her, stop her, turn her – all to no avail. Shana and her father have no idea what to do…and they aren’t alone. As Nessie walks, she is joined by more walkers. People who stopped whatever they were doing and joined the mysterious march. They’re not dressed properly to be in the elements, they are unresponsive to any stimuli, and their ranks continue to grow. All they want to do is walk. They have some sort of internal map guiding them, unknown to anyone but (hopefully…maybe) them.

Obviously this situation does not go unnoticed. Soon the sleepwalkers become the “flock”, those like Shana who stay with their loved ones become “shepherds”, and the world keeps spinning. The CDC becomes involved to try and figure out what’s happening and there we meet our main character. Benjamin Ray, persona non grata at the CDC, ends up back in the fold to try and figure out this bizarre phenomenon. It is through Benji and Shana that we travel with this strange group, and watch as the wider world responds to both the flock and other, greater pressures straining an already fragile and fractured civilization.

I would be remiss if I didn’t mention that Wanderers, in premise alone, is a book seemingly written specifically for me. The mysterious sleepwalking illness, the deep dive into our main characters, the sci-fi elements, the dystopian ugliness of a society following its worst instincts, the plain old weirdness of it all is just me all over the place. The danger, of course, is that a book that checks all my boxes will smack its head against unrealistically high expectations.

But nope! Wendig makes good on every aspect of his complicated premise. Wanderers is a hell of a ride. It is 800 pages of flawed characters like Pete Corley (aging rock star) and Matthew Bird (misguided preacher), violent white supremacists, desperate families, mysterious technologies, environmental brinksmanship, and at the center of it all the unyielding flock. There are enough twists to keep even the most hardened mystery junkie happy, and the story adheres to enough of our current reality to make the entire thing terrifying.

I’ve seen comparisons between Wanderers and The Stand. I think they’re fair in terms of scope, but unfair to Wendig in terms of content. This book doesn’t stand (see what I did there) in the shadow of anything else, it’s original and timely and an absolutely addictive read. I finished it at 3:38 a.m. and I regret nothing. Highly recommended for the reader looking for dystopian horror tinged with sci-fi, well developed characters, and a look at our own societal precipice through a strange and wonderful lens.