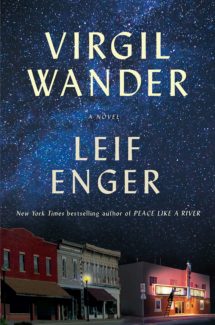 On an icy Minnesota shoreline, Virgil Wander survives a car accident that is both horrifying and visually spectacular, his midsize American sedan careening through the falling snow and plunging into Lake Superior. After he walks away from the wreck with nothing more than a concussion, his small town of Greenstone embraces him as a miracle.

Virgil spends much of Leif Enger’s new novel in the throes of what his neurologist paradoxically calls a mild traumatic brain injury. He moves about in a mental and physical fog, which of course is not funny, but his story is inviting and funny—very funny.

Orphaned, single and middle-aged, Virgil describes himself as “a Midwestern male… aspiring vaguely to decency, contributing to PBS, moderate in all things including romantic forays, and doing unto others more or less reciprocally.” He is modest to a fault, with no sense of how articulate and empathetic he is—and what a catch he might be for some of his female admirers.

Virgil owns the Empress Theater, which is the shabby, beating heart of Virgil Wander. He works as the projectionist and lives in the apartment above the cinema, “first because of a dire romantic impulse and second because in seven years of trying I haven’t been able to sell it.” When Virgil returns home after being released from the hospital, he feels like he has become his own sad ghost. His clothes seem to belong to someone else, and his shoes don’t fit. The apartment’s previous tenant—his old self—is long gone.

As Virgil struggles to regain his identity and memory and language skills, we meet his indomitable crew of friends. Their life in little Greenstone is far from dull; they are especially busy welcoming an enigmatic visitor from afar and planning for the town festival, not unkindly referred to as Hard Luck Days. They also fly kites, watch a cache of illegal films, and seek revenge with a fish reminiscent of Moby Dick.

If at times the story might be described as whimsical, it is not the abiding tone of the book. On the contrary, Enger’s pages are brainy and his language masterful. His observations on humanity, as conveyed through Virgil’s pitch-perfect first-person narration, do not shy away from discomfort or grief. His characters are forced to hack their way through one good versus evil moment after another, all while wrestling with what Virgil calls emotional potholes—loss, self-doubt and the like.

As with his stunning first novel, “Peace Like a River,” Enger weaves a subtle thread of magical realism through Virgil Wander. Never over the top, this sense of enchantment fits within the context of the story and ultimately offers readers a feeling of unanticipated hope. (And tears and goosebumps—those, too.)

Virgil Wander defies so many classifications because it succeeds in being both dazzling and salt-of-the-earth at the same time. Case in point, it contains sentences ranging from “Look at all that unguarded bratwurst” to “Sadness wore him like a tailored suit.” Enger feels at home between these contrasts and ties them together with a beautiful, effortless bow, creating a book that is exactly right.

In Virgil Wander, Enger gives us a generous and resonant story about redemption and the ways we restore ourselves to—well—ourselves. “Frame by frame,” Virgil says, “a hard moment could be endured because the next was always rolling in. The next might sweep you up.”