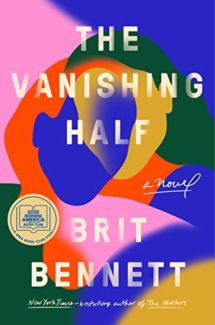 Two sisters, two Americas: a twinhood split down the middle

I can’t think of any other new release in fiction this year that is as heartbreakingly relevant as Brit Bennett’s The Vanishing Half.

Her marvelous follow-up to The Mothers is a saga that digs into matters of race, sexuality, and the nuances—both seen and unseen—of one’s identity. It is an important and weighty story, but Bennett’s writing style, which flows as smooth as the river running through Mallard, Louisiana, will mesmerize readers from the very first page.

“The river would right her. She would stand on the bank and remember the way.” So believes Desiree Vignes, who has just returned to tiny Mallard with her daughter in tow. Little Jude’s skin is a few shades darker than her own, which gets everyone in town buzzing with gossip.

Desiree hasn’t been home since she and her identical twin sister, Stella, ran away at the age of sixteen. Haunted by the unthinkable murder of their father and furious about being forced to drop out of school to clean houses for white people, the sisters fled to New Orleans. Desiree later relocated to Washington, D.C., where she became, among other things, a wife, a successful fingerprint expert, and a victim of domestic violence.

Desiree’s own mother, Adele, and all of Mallard’s townspeople are shocked at Desiree’s unexpected reappearance. Perhaps the most perplexing aspect is that Stella herself is nowhere in sight. Why aren’t they together? Why doesn’t Desiree—or Adele—know where Stella is? How did two formerly inseparable sisters manage to exorcise themselves entirely from each other?

As Bennett unfolds her feverish and spellbinding story of a twinhood split down the middle, we eventually arrive at the answer: while Desiree has embraced her Blackness, Stella made a decision long ago to pass as white instead.

The Vanishing Half spans more than five decades, jumping from the Deep South and D.C. to California and Manhattan. Bennett masterfully braids together the distinct perspectives of Desiree, Jude, Stella, and Stella’s own blond-haired, violet-eyed daughter, who has no clue about her mother’s past. “[Stella]’d done one interesting thing in her whole life, but she would spend the rest of her days hiding it.”

For someone so young—Bennett just turned 30—she has an astonishing grasp on, well, everything. Her primary, unflinching focus is on the disparate sets of opportunities that are available to two women, one Black and one white, and how these opportunities change (or not) as the Vignes sisters proceed through various chapters in America’s history. But Bennett also incorporates fully developed ideas about marriage, mother-daughter relations, LGBTQ equality, and the study of medicine.

What could’ve easily been an unwieldy book is nothing short of extraordinary in Bennett’s capable, marvelous hands. “This river, like all rivers, remembered its course.”