The king of kings… 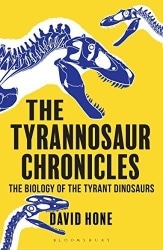 It’s aptly named.  The undisputed king of the dinosaurs, Tyrannosaurus rex is clearly the most famous and most feared of the ancient Earth’s inhabitants.  Thanks to extensive evaluation of the fossilized remains of more than 50 individuals, an awful lot is known about these former natives of western North America.  With an exquisite sense for the details, British paleontologist David Hone has taken all this knowledge and distilled it down to its pure essence, creating The Tyrannosaur Chronicles, a wide-ranging look at T. rex and its numerous toothy brethren.  If dinosaurs are your thing, this book is what you’ve been looking for. 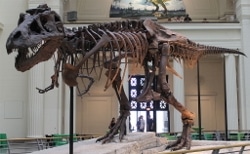 Sue, the intimidating T. rex at the Field Museum in Chicago.

Hone first starts with basics.  Explaining what is known about how tyrannosaur bodies worked, he describes each body system.  From their towering bony anatomy to some of the most impressive core muscles in the history of land creatures, he presents copious intriguing details.    He then goes on to explain much about their behavior – sleeping, hunting, care of offspring – as well as how they interacted with their environment. 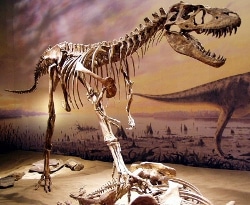 Another tyrannosaur, named Gorgosaurus, at the Royal Tyrrell Museum Alberta.

Based on a careful analysis of all the available data, he doesn’t hesitate to speculate when warranted, but he also makes an effort to deflate many of the more outrageous claims that surround these amazing creatures.  He also clearly illuminates some current controversies, not hesitating to explain his verdicts.

Unfortunately, despite the fearsome topic, Hone’s prose doesn’t provide much emotional oomph.  While the book is jamb packed with information, it’s presented in a rather dry fashion.  There’s no denying that the facts and analysis are abundant – he’s also clearly enthusiastic about the topic – but his writing style is consistently lacking in the energy necessary to carry the reader along.

In the end, I’m willing to concede that The Tyrannosaur Chronicles is just the ticket for any and all T. rex buffs out there, featuring the deep and insightful thoughts of one of the fields foremost scientists.  But regrettably, I didn’t enjoy it as much as I’d hoped and think that it’s unlikely to generate any new waves of tyrannophilia amongst the reading public.   Three rather cold-blooded stars for this one.