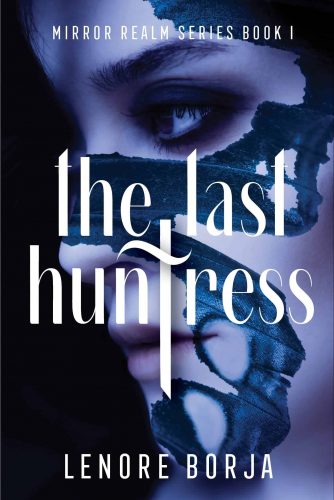 I’m no stranger you young adult fantasy fiction. In fact, I kind of love it. Teenage heartache combined with supernatural skullduggery is pretty irresistible. I saw my chance to indulge in Lenore Borja’s The Last Huntress and grabbed it.

The Last Huntress is Alice’s story. Alice is the new kid in town, having moved following her parents’ divorce. She’s devoted to her mom, mad at her dad, and not looking forward to this fresh start.

Her reservations are confirmed when the neighbor, a handsome kid to be sure, turns out to be a creep of the highest order. Despite his unsavoriness, Alice decides to attend a party he mentioned. She needs to get out and meet people sometime, right?

The party goes even worse than she anticipated but she does meet a handsome stranger on her way home. He’s also not very nice, but in a different way. Alice would like to take to her room for eternity.

But yet, she isn’t comfortable there, either. There’s something going on with the mirrors. Her reflection is not behaving as a reflection should. Alice is pretty sure she’s losing her mind. What is happening to her, and what does it have to do with this place?

Author Borja takes Alice down a rabbit hole of mythology, demons, and secrets. As she discovers amazing things about herself she makes incredible friends and powerful enemies.

The Last Huntress is the first book in the Mirror Realm series and it covers a lot of ground. Don’t make the mistake I did and put it down for a while – it’s hard to catch back up. The romance and demon-slaying (obviously required) are on point, but the world building is a bit confusing.

I like Alice, her mother, and her eccentric group of friends. The romance is a little over-wrought, but that comes with the territory and also fits the plot line. If you pay attention while Alice is learning her mythology (and maybe stick a post-it in that section in case you need a refresher), you’ll enjoy this world and its inhabitants,

The book carries messages of friendship and loyalty, true love and second chances. It’s a touch gruesome here and there, but nothing wildly over the top. The Last Huntress is pretty good YA fantasy fiction. I liked it well enough to give the next Mirror Realm book in the series a try. If you’re a fan of the genre, check it out.