A show-down at a rural gas station leads to an icy river, which leads to a literary thriller that’s hard to put down 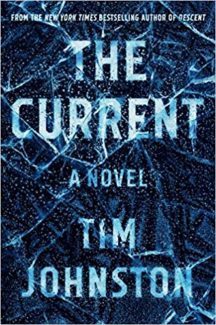 To open a Tim Johnston novel is to hold a sweaty book in your hands.

I mean this in a literal sense.

As I was reading The Current, damp patches appeared on the pages under my fingertips, which were perspiring from nerves.

Johnston has become a master of the literary thriller. Much like his previous novel (Descent), The Current is a taut, lushly written story that doesn’t hinge on a flimsy or far-fetched “reveal” that’s becoming all too common in the genre. Avoiding bells and whistles, he embraces a sturdy Midwestern sensibility that features small towns, a moody winter landscape, and blue-collar folks just trying to get by. His characters are gruff and tenacious; they might not be sophisticated, but their emotional complexities run deep. Johnston places them in heart-banging circumstances with sentences so haunting you’ll be sighing out loud.

Audrey Sutter and Caroline Price are driving north from their college campus to visit Audrey’s father, a retired sheriff who is gravely ill. As they make their way along the slushy border between Iowa and Minnesota, they encounter two not-very-nice men and a whole lot of sexual harassment. Their show-down is harrowing, but it’s the ensuing horror that becomes the centerpiece of Johnston’s compulsive plot.

What happens to Audrey and Caroline is no accident. Wounded and bereft, Audrey turns to a similar unsolved case involving a local girl, ten years prior. She and Holly Burke are bound in a number of ways, but as Audrey digs for more information, she creates a ripple effect as forceful as the current of the Black Root River. Not everyone is pleased with her desire to piece together the past.

Rivers are to The Current as mountains are to Descent. Once again, Johnston beautifully examines the ways the natural world harms, destroys, shields and protects us. His descriptions in The Current are so atmospheric you can practically feel the cold seeping through your socks and biting at your ears.

Trigger alert: Johnston does not shy away from tragedy. In The Current, he looks grief squarely in the eye as he tries to make sense of missing children, worried parents, and the end of innocence. He shows us how people learn to cope with and move on from loss—or don’t. His themes are not easy, but they’re real and true and leave me feeling like I’ve got thicker—sweatier—skin.

What I want more of in The Current is an ending. It comes a little too abruptly for me, and I am left scratching my head about a few things. I’m assuming, however, that Johnston simply trusts his readers to fill in the blanks and be all right with any unresolved threads. After all, he expects the same of Audrey Sutter, Caroline Price, and everyone who calls the Black Root River home.