Sting of the Wild, The

Agony in a very small package… 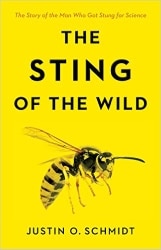 They’re the pain experts.  The bees, wasps and ants – also well known for their remarkably sophisticated societies – have taken the intentional infliction of pain and agony to a level unequaled in the animal kingdom.   And there may be no human more expert in the finer points of Hymenopteran- induced torment than Justin Schmidt.  Fascinated by stings of every variety, this entomological celebrity tells of his adventures in suffering in The Sting of the Wild.

Describing a sting much like an oenophile might describe a fine cab, Schmidt has set out to catalog stings according to the Schmidt Sting Pain Index.   Whether he’s recalling the horrific sting of a tarantula hawk – a “blinding, fierce, shockingly electric” level 4 – or the more mundane efforts of a sweat bee – a “light and ephemeral, almost fruity” level 1 – the author never loses his enthusiasm for the topic, despite the fact that he seems to get stung a lot.  He’s not a masochist as much as he’s endlessly eager to learn more about these creatures and fearless (some would say foolish) enough to risk getting stung a time or two in his quest. 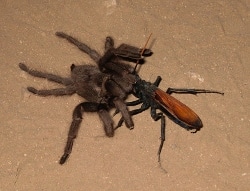 A tarantula hawk drags her paralyzed victim back to the nest.

Intrigued by the underlying chemistry that makes stings hurt so much, Schmidt has traveled the globe, collecting venom from hundreds of insects.  Whether he’s digging up bullet ant colonies or harassing mud daubers, he frequently gets to personally experience the venomous sting of his subjects, an evolutionary achievement many millions of years in the making.  Throughout the book he enthusiastically shares much of the natural history of this amazing group of insects, including plenty of humorous anecdotes along the way. 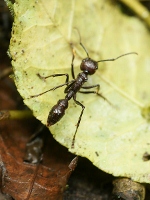 The bullet ant — her sting produces 24 hours of unremitting agony (4+).

And just when you think he’s completely wacky, he takes it to a new level, going so far as to taste some of the Africanized honey bees flying outside his window, just like the kingbirds that so eagerly feed on them.  Much to my surprise, even this bit of zaniness yields intriguing information.  I’m just a little worried about the stories that he thought were a little too crazy to share.

A gonzo entomologic journalist beyond compare, Mr. Schmidt has gained some notoriety in naturalist circles and I’ve come across his antics from time to time in my other nature reading.  I’m happy to say that The Sting of the Wild lives up to the author’s billing as “The King of Sting”.  It’s ridiculously entertaining and jam packed full of terrific details, he even includes the complete pain index at the end of the book.  You may be fortunate enough to have never been stung by a warrior wasp, a velvet ant or a cicada killer.  Now you don’t have to.  Allowing more cautious nature fanatics like me to live vicariously through his exploits, Schmidt deserves credit for bravely revealing the secrets of the mistresses of pain.

Review of other books about scary creatures: