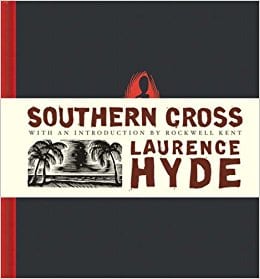 They had been living there for almost 4000 years.  Thriving in an environment of idyllic beauty and abundance, the islanders on the Bikini Atoll had everything they needed to sustain them.   One of the more remote Marshall Islands – which hosted a major campaign in World War II’s Pacific Theater – the atoll was as obscure as it was beautiful.  It wasn’t until after the war, when the whole group of islands was placed under the protection of the United States, that it rapidly became evident that Bikini would be the perfect location for a nuclear bomb proving ground.

Rather than react in horror at what they had done at Hiroshima and Nagasaki, vowing to never allow such atrocities to happen again, US military officials were doubling down.   Bikini was the perfect place to continue testing, optimizing and refining the art of nuclear war, but the only thing holding them back was the fact that there were actual humans living on the atoll.  Appallingly, that didn’t slow them down for one minute.  Angered by the thoughtless evacuation of the native Bikini islanders and the subsequent obliteration of their home and way of life, Canadian artist Laurence Hyde was inspired to create a remarkable chronicle, entitled Southern Cross. 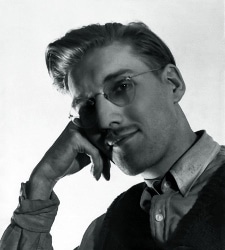 Known as a wordless novel – a genre that was rather popular during the early 20th century – Hyde’s work consists of 118 wood engravings.  The images present a fictionalized account of one native family’s experience when their island home is destroyed by nuclear testing.  First published in 1951, in a limited edition, the work was republished in 2007, including the original introductory essays by Hyde and American artist Rockwell Kent.  It’s frequently referenced as an early precursor to the modern graphic novel.

It goes without saying that wordless storytelling presents unique challenges, but when the limitations of the wood engraving medium are added to the mix, the obstacles become formidable.   Involving laborious preparation and exquisitely meticulous detailing, the end result is remarkable.  Effectively capturing human emotions, natural beauty and horrific technological mayhem, the images convey a uniquely tragic story with great passion.  Whether he’s portraying windblown palm trees, a single rain drop or a seagull annihilated by a radioactive blast, Hyde’s artistry is consistently remarkable.  His ability to contrast the natural beauty of the tropical paradise with the dreadful reality of nuclear obliteration is consistently astonishing given the limitations of the medium. 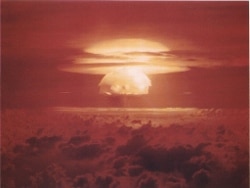 Hyde’s work of protest was remarkably prescient, given that the travails of the Bikini islanders were just getting started when the book was published.  Moved to an uninhabited and inhospitable island, the 167 islanders began to starve and the US government was appallingly slow to do anything about it.  Meanwhile, a total of 23 different nuclear devices were detonated at the atoll.  Most infamous was the massive Castle Bravo test in 1954, which scattered radioactive fallout across half the planet.  Having been promised the right to return once testing was completed, some residents were allowed to resettle the island in the early 1970s, once officials determined that radioactivity levels had dropped sufficiently.  However, when further testing detected various plutonium isotopes in the islanders’ urine, it became clear that their home was still uninhabitable.  To this day, legal battles continue and only a few caretakers reside on the island year around, probably to the detriment of their health.

A wordless work of artistic beauty that documents one of human history’s most audacious periods of insanity, Southern Cross captures tragedy in a uniquely effective way.  Understandably limited in its scope, given the medium, it serves as an emotional stepping stone that might make you want to read more about it.  Highly recommended.