A Patriot in Moscow? 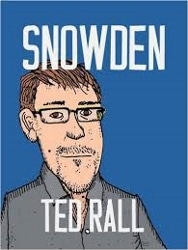 Patriotism.  Not of the “my country right or wrong” variety, but something based more on a steadfast belief in the founding principles of American democracy.  That’s the emotion that resonates most strongly in Snowden, a brief illustrated account of the life of a young whistleblower in exile by Ted Rall.

Famous for single-handedly revealing the full extent of the US government’s ubiquitous domestic surveillance system in 2013, Edward Snowden has been both hailed as a hero and condemned as a criminal.  But whatever you think about his actions, the question that’s most intriguing is “Why did he do it?” 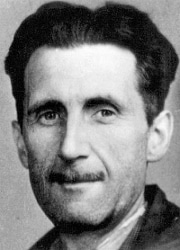 Starting with Snowden’s formative years as a good student, loyal Boy Scout and enthusiastic US Army enlistee, Rall goes on to describe how the young man steadily ascended in the byzantine world of the US intelligence community.   A politically unremarkable individual, Snowden was no leftist, anarchist or bleeding-heart liberal, which makes his subsequent actions that much more surprising.  But Rall effectively sorts out what motivated the 29 year-old to flee his homeland and sacrifice his freedom in order to reveal the truth.  Well aware of the risk he was facing, Snowden prepared for the worst and planned his escape carefully, seeking asylum in various locations before ending up in Moscow.

An award-winning political cartoonist, Ted Rall, fits snuggly on the far left end of the political spectrum.  Known for his unrelenting criticism of administrations both Democratic and Republican, he clearly shares Snowden’s point of view regarding the government’s “Big Brother” surveillance system, going so far to say that he would have done the same thing if he was in Snowden’s shoes. 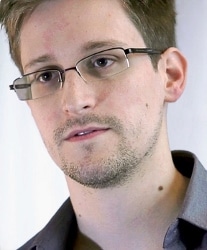 But what’s most interesting about Rall’s analysis is his discussion of why Snowden stands so very much alone.  Despite the fact that thousands of people had opportunity to do it – and certainly some of them must have had similar reservations about their government spying on each and every American – no one else was willing to uncover the government’s secret programs.  I suppose it’s no small wonder, given how quickly the strong arm of the law came down on the one man who did.  Everyone who works at the highest levels of the industry – Snowden included – knows full well that their life will be destroyed if they cross the line.  When it comes to “state secrets”, there’s no such thing as a right to fair trial, as the government can conceal any evidence that it considers too sensitive.

While an objective accounting isn’t Rall’s primary goal, he does present some of the arguments against Snowden and his actions.  However, he dismantles them rather easily, exposing much governmental hypocrisy in the process.  As always, Rall’s accompanying artwork is not known for its beauty, but it does add to the narrative in ways that simple prose cannot.

Thoughtfully weighing one man’s violation of the law versus an entire government’s methodical desecration of the very foundation of an open democracy, Snowden comes down decisively on the side of personal freedom and privacy rights.  The book provides a comprehensive and well-argued defense of a singular American hero, showing how patriotism can come in many different forms.  Recommended for anyone with an hour to devote to civic enlightenment.