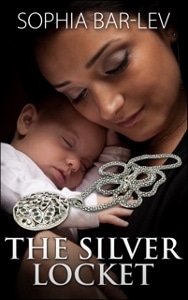 I hated this book.  Every wretched page of it.  If you just want an easy summary of my feelings, there you go.  You can put down The Silver Locket, never read it, and rest easy.

A little more depth, you say?  It’s an anti-abortion book in sheep’s clothing.  That not your thing?  You can stop reading now and find something else to do – play solitaire, do laundry, watch reality TV.  If that is your thing, you’re going to hate me, so you might as well stop reading, too.

So basically, I’m writing this for the masochists out there, and the ones who like to listen to me run my keyboard (those two groups undoubtedly have considerable overlap).   So here we go…

We start out with a rape.  First chapter, 3 pages, set in 1941.  Soft pedaled language, a kindly ride home, end of chapter.  Then we skip to 1942, to the hospital where Sarah and her roommate Rosalie are both giving birth.  Sarah to the child resulting from the rape, Rosalie to the child of her husband, who is in Europe fighting the war.  Rosalie’s child does not survive, Sarah’s child does.  Though Sarah is married, her husband had to take a job far from home and knows nothing of her rape or her pregnancy.   She couldn’t tell him, for it was shameful.   Arrangements are made for Rosalie to adopt Sarah’s baby.  A baby that she adores, but must give up.

The entire rest of The Silver Locket is about these two women and their lives after this pivotal event (the adoption – not the rape).  Ethereally beautiful Rosalie’s husband does not survive the war, but she is surrounded by people who love her and her life after those traumas is the picture of martyred perfection, with her at the angelic center.  Sarah moves to California, never says a word about her rape or pregnancy to her husband, has more children and lives an idyllic life punctured only by her longing to know the daughter she gave up for adoption.  Both women are eternally grateful that this spectacular child was brought into their lives, a child who never causes a moment of pain to anyone who crosses her path.

Eventually, Sarah has to come clean to her husband.  He is saintly in his understanding – as is everyone in Sarah’s life – her friends, her children, her children’s’ friends.  Her only uncomfortable moments were in the years in between, brought about by the unwelcome intrusion of someone being upset over being adopted, or finding out someone is adopted, or finding out someone gave up a baby for adoption.  Because that’s the worst thing that ever happened to Sarah – the adoption.  But she is always there to council those sad souls, with her gentle wisdom born of her own majestic sacrifice, the sacrifice which she carries alone, in her heart, because she is wonderful and brave.

In the end, everyone meets and is happy and fulfilled and grateful and beloved by all.  Even the rapist sees the error of his ways and is redeemed.  The child Sarah gave up writes her a passionate letter spelling out exactly how important it is that Sarah didn’t give in to the temptation to have an abortion, no matter how great that temptation may have been or how many people tried to make her do it (for the record – no one tried to make her get an abortion and it was only vaguely alluded to a single time by a nurse who knew the pregnancy was the result of rape).  We get to read that letter in its entirety twice, once when the grown child writes it, once when Sarah reads it.

Can you tell I didn’t love this book?  Can you tell why?  No?  I’ll tell you.  Nowhere in this thing is there any mention of the trauma of being raped, or being impregnated by a rapist, or giving birth to the child of a rapist.  Three pages at the beginning, where Bar-Lev talks about shock and crying but never about the actual RAPE.  Sarah doesn’t have flashbacks to being violently assaulted; she has yearnings for the child that resulted from that assault.  She doesn’t wonder if that child will grow up to be like its father, she knows with absolute certainty that she will be an angel sent from heaven – and she is!  Hardly anyone ever says RAPE, they talk about “the attack” a few times and how sorry they are Sarah had to go through that – though Sarah is quick to brush off those kind words and focus on the beautiful, perfect child that came of that rape.

Bar-Lev sets The Silver Locket in the 1940s, giving her the perfect excuse not to talk about rape.  People didn’t talk about rape in those days – they used other, less harsh words.  So Bar-Lev is off the hook and doesn’t need to acknowledge that the victims of rape suffer a whole lot more than pangs of longing for the child of rape they bore and gave birth to.

But THANK GOD SARAH DIDN’T GET AN ABORTION!  Because nothing would have been worse than depriving Rosalie – and the world, really – of this beautiful, magnificent, perfect child.   And since Sarah suffered no ill effects from the rape and subsequent pregnancy, it’s clear that adoption is always the best option for someone who is violently raped, left lying in the dirt, pregnant against her will.

Nor does Bar-Lev even for a second acknowledge the stigma of rape survivors in that time period.  Realistically, Sarah’s husband would not have been supportive or abided by her wishes that he do nothing about finding her rapist (because she was over it long ago, right?).  He would have been much more likely to either blame her or call the police (as would every person who learned of her situation at the time of the birth – but they didn’t).

The icing on this shit-cake, however, is the redemption of the rapist.  That he shows up at all in the story is a miracle, since his actions only had consequences that were magical and wonderful.  That he went to a rabbi and was forgiven because he was truly repentant, agreeing that he  would use the earnings from the job the rabbi got for him for “compensation” to the people he stole from and the women (plural!) he “violated”.  He had already served 18 years in prison for theft and sexual assault of other women; he should be forgiven, for he had already paid a heavy price for his “transgressions”.

Does that sound familiar?  The rapist who has “already paid a heavy price” for his actions – so he shouldn’t have to suffer any more?  That’s exactly the mentality that lets a convicted college rapist go with 3 months in community jail.  The same one that places so little value on the mental and physical health of a woman that she is deemed unfit to decide whether or not she should bear and give birth to the child of the man who raped her.

I don’t care what your stand is on abortion – everyone is entitled to their opinion on such a personal issue.  But when an author purports to tell a story about the trials and tribulations of adoption (from the back cover: “Adopting a child is not for the weak at heart.  Either is being adopted.”) and instead, as her book progresses, uses it more and more as a bully pulpit to deny the harm caused by rape and pretend that adoption is always, ALWAYS the best answer to a pregnancy that results from violence, I call foul.

I will never recommend The Silver Locket to anyone.  I will not give it a star rating; I will not place a link at the bottom of this review that may tempt someone to buy it.  It is trash like this that pits women against women, endangers reproductive rights, and perpetuates rape culture.  Shame on you, Sophia Bar-Lev.