A story that flows as effortlessly as a green silk ballgown 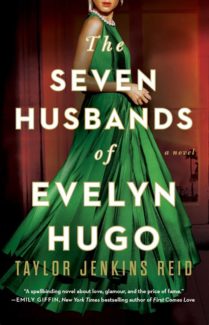 At age 79, Evelyn’s acting career is behind her, but she is still an icon, perched in her opulent apartment overlooking Central Park. She has made the decision to tell her life story—including the carefully guarded details of her sorrows, regrets and marriages—to a young, unknown reporter named Monique. (Why Evelyn has selected Monique for this opportunity is a mystery that unravels as the novel progresses, and the finale does not disappoint.)

The two women, more alike than Monique realizes, hole up in Evelyn’s study, where Evelyn begins the eviscerating process of exposing her deeply personal history. “We’re really doing this. Evelyn and me. Subject and biographer. It begins now,” Monique tells herself, with no small amount of reverence. She already knows that Evelyn has an Academy Award, seven former husbands and a late daughter to her name, but what she doesn’t know turns out to be staggering.

Evelyn starts her spellbinding narrative with her childhood in Hell’s Kitchen. Born Evelyn Herrera to Cuban immigrants in 1938, she is 11 when her mother dies of pneumonia. After her father becomes increasingly abusive, she hatches a plan—via unsuspecting husband #1—to escape to Hollywood. Once in Los Angeles, she dyes her hair blond, rechristens herself Evelyn Hugo, and lo, her wily ascent to stardom is underway. It goes without saying that #1 is tossed aside like the stub of an old movie ticket.

While not terribly literary or highbrow, The Seven Husbands of Evelyn Hugo is seductive, transporting readers between sun-drenched Hollywood and high-rent Manhattan. Jenkins Reid creates a fleshed-out world with boozy parties and dazzling celebrities, but this sense of glamour is never at the expense of more meaningful subject matter. Indeed, Jenkins Reid offers a provocative examination of lust, ruthlessness and hunger, presenting a woman who is as vulnerable as she is scrappy. “My heart was never in the craft of acting, only in the proving. Proving my power, proving my worth, proving my talent,” Evelyn says.

A formidable, complex character, Evelyn avoids the high road for much of her thirty-year career, but she is likeable, largely because she’s a product of her times. She encounters sexism, racism, double standards and a pay gap, but she manages to bypass such constraints in clever, if not terribly moral, ways. All-told, the price she pays for maintaining her stardom, both on- and off-screen, is immense. “Being yourself—your true, entire self—is always going to feel like you’re swimming upstream.”

Ultimately, this is the tragic thread that snakes its way through The Seven Husbands of Evelyn Hugo. How far will people go to fill the empty holes inside them? How far is it acceptable for people to go? After acknowledging that all holes are not created equal, Evelyn stumbles upon her answer: “You have to be willing to deny your heritage, to commodify your body, to lie to good people, to sacrifice who you love in the name of what people will think.”

Jenkins Reid leaves it up to the reader to decide if it’s worth it in the end.