Selfishness of Others, The 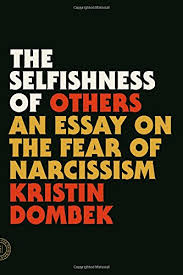 I first encountered the idea in a Chuck Klosterman essay, when he commented that he’d never met anyone “with the ‘correct’ level of self-esteem”.  My thoughts frequent came back to this theme while reading The Selfishness of Others, an extended essay by another cultural journalist, Kristin Dombek.

Largely as a result of the complexities of human nature, we’ve probably all had our moments of narcissism.  Although, making that comment probably makes me a narcissist.  It’s seems that a certain kind of circular logic attracted Dombek to the topic.   If your self-esteem is too high, you’re a narcissist.  At the same time, you might be a narcissist because you’re trying to cover up your poor self-esteem.  Either way, you lose.

Helpfully, the author includes the full definition of Narcissistic Personality Disorder as proposed in the fifth edition of the Diagnostic and Statistical Manual of Mental Disorders by the American Psychiatric Association.  It seems like a pretty good definition to me, but as Dombek describes, interested parties have snipped out various parts of the rather lengthy description and created a minor industry.  Finding narcissism in every struggling relationship or offending remark, some commentators have proclaimed that – at least in the United States – a narcissism epidemic is upon us. 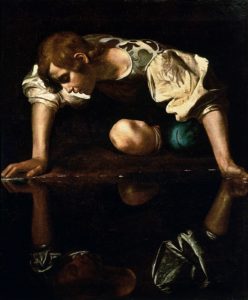 On the surface, it takes only the mind boggling ubiquity of the selfie to prove this point.  But when it comes to human behavior, things are never quite as simple as they seem.  Donning the hat of a journalistic skeptic, the author dives deeply into this idea.  She launches her exploration of narcissistic selfishness from – where else? – a reality show on MTV.   But the actual reality behind the featured episode of My Super Sweet 16 is anything but clear.  She goes on to explore other examples of supposed narcissistic extremism from bad boyfriends to mass murderers.

Delving back into the history of the concept from Ovid to Freud, Dombek unrelentingly dissects these narcissistic claims, deftly exposing them as straw men.  From the outside – as typically presented in social media – it seems like everything is narcissism.  But when looked at more completely and objectively, the term often doesn’t fit, losing its meaning as it’s repeatedly misused and overused.  Unfortunately, in modern times, there may be no character flaw more feared, leading Dombek to propose an entirely new diagnosis of “narciphobia”.

As the title of the essay implies, it’s really easy to point out other people’s selfishness.  But in the end, it seems like overly enthusiastic pop psychologists are simply trying to pathologize asshole douchebaggery.  It’s usually not very hard to identify an asshole and we certainly don’t need the American Psychiatric Association to help us.  While being an asshole may be the new normal in the good old US of A, it doesn’t have anything to do with mental illness.  Deftly conceived, well written and consistently intriguing, The Selfishness of Others is sure to kindle a wide ranging discussion if you’re willing to share your thoughts in a considerate and empathic manner.

You might also find Paul Bloom’s Against Empathy interesting.