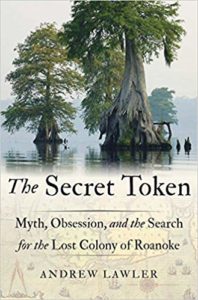 It’s the coldest case in North American history.   Initially known as the Roanoke Colony, it was England’s first attempt to colonize the vast continent, way back when the British Empire was still just a dream.  Organized by the first Queen Elizabeth’s right hand man, Sir Walter Raleigh, the 1587 expedition to establish a foothold in what is now coastal North Carolina was destined for failure.  But much to the chagrin of those who would come after, the 115 people – men, women and children – that made up the original colonizing population appeared to have vanished into thin air when supply ships finally returned to the coast in 1590.  Assisted by only the most cryptic of clues, subsequent historians have not hesitated to fill in the blanks with all sorts of theories – crackpot and otherwise – creating a small industry in the process.  A recent addition to the discussion is The Secret Token, by science writer Andrew Lawler.  It’s a thoroughly entertaining deep dive into a truly intriguing mystery.

Lawler starts by establishing what’s known about the earliest European colonization of eastern North America, from the initial forays by the Spanish in what is now Florida and Georgia to the establishment of Jamestown by the British in 1610.  He then goes on to examine the mystery left behind by the Lost Colony of Roanoke, placing everything known about the ill-fated settlers into the context of the Elizabethan era. 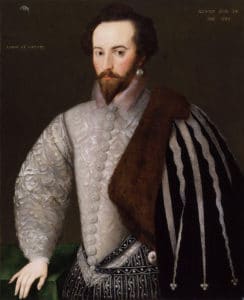 The author then goes on to explore the more than 400 years of searching that have followed the colony’s disappearance.  Repeatedly and frustratingly unfruitful, the quest has gotten the better of countless archaeologists, genealogists, historians and amateur sleuths.  Full of boldly imaginative speculation, numerous hoaxes and an appalling lack of good fortune, the story is almost comical at times. 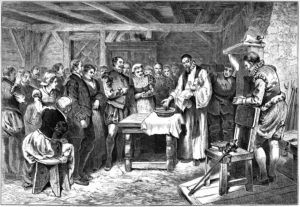 Lastly, in what is the most interesting part of the book, Lawler embarks on an exploration of the obsession that has built up around the Lost Colony, trying to understand what has motivated so many people to devote so much of their lives in pursuit of what is likely to be an unsolvable mystery.   He focuses in particular on the cult surrounding the infant Virginia Dare, the first English birth on the continent, whose story has attracted a mythology all of its own.  Racism, eugenics, myth and America’s unique history as a melting pot are all deftly woven into the story.  He then goes on to offer his own theory, displaying a remarkable level of rationality, given the fanaticism that the topic has so often generated.

Throughout the book, Lawler repeatedly points out how many of those who’ve chosen to pursue the Roanoke mystery have managed to destroy their standing in the academic world.  It’s part of what makes the topic so riveting – feverish obsession facing off against an insolvable puzzle.  As the author winds his way through the many twists, turns and dead ends, he’s often warned of the danger this morass of conjecture, hyperbole and insanity presents to those who fail to resist its lure.  But even though the book raises more questions than it answers, Lawler’s finely crafted narrative is well worth diving into.

If you like a healthy dose of mystery with your history, The Secret Token is sure to please.  Combining a thorough analysis of the ill-fated colonists’ enigmatic story with an engrossing metahistorical look at why scholars and other fanatics have been so obsessed with the whole saga, it’s a thought-provoking  – and surprisingly levelheaded – account that’s captivating from beginning to end.