Secret Lives of Bats, The 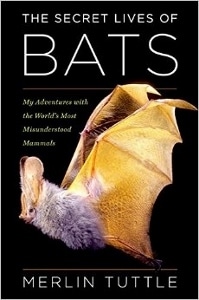 We used to think they were utterly evil. But nowadays, anyone who pays attention knows that bats are widely beneficial to humans – particularly as pollinators and insect pest consumers.  Moreover, they’re entirely fascinating in their own right.  There may be no one who has played a more critical role in the complete transformation in the common perception of our furry flying friends than Merlin Tuttle.  A bat enthusiast from an early age, he tells of a life full of wide-ranging chiropteran adventures in The Secret Lives of Bats.

As he has matured as a bat expert, photography has become the author’s primary technique for presenting the amazing details of bat biology and behavior. In his unceasing efforts to photograph each of the approximately 1300 worldwide species, he’s braved incredibly harsh and hazardous conditions, traveling to dozens of countries with his fully customized mobile bat photography studio.  These adventures make for entertaining reading and a gave this reader a new appreciation for how hard it is to take a good picture of a tiny flying insectivore.

Tuttle is a talented storyteller, a shrewd conservationist and a gifted photographer, but he’s also a brilliant scientist. His detailed description of his work with frog-eating bats in the rainforests of Panama is a particularly fascinating highlight.  His ability to sort out the complex ecological web that these creatures inhabit while sloshing through treacherous mosquito and jaguar-filled jungles in the dark is nothing short of astounding.

A thoroughly entertaining memoir of an adventure-filled life spent with the planet’s most persecuted mammals, The Secret Lives of Bats is packed with enthusiasm and remarkable science.  In each chapter, Tuttle makes it clear why he finds bats so fascinating and reveals what’s driven him to become their most vocal ambassador.  Highly recommended by anyone who’s interested in bats or who enjoys science writing featuring plenty of peril.