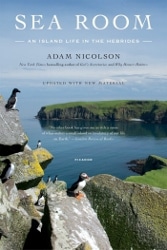 It’s known as “The Minch”.  It’s a strait that separates the Scottish Highlands from the northern Hebrides to their west.  In local folklore it’s the home of mysterious blue men who lure sailors to their death in the forbidding seas.  If you look for the Minch on a good map, you might see a trio of tiny islands smack dab in the middle of it.   Known as the Shiant Isles, they total just 600 acres in area.  But even though they may seem insignificant on a global scale, they hold remarkable secrets.  Purchased by his father in 1937 and gifted to him when he turned twenty-one, the islands have been dear to the heart of writer Adam Nicolson, who has spent much of his free time there.  Prior to giving them to his own twenty-one year-old son, he wrote about them in a remarkable book entitled Sea Room. 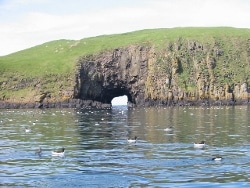 It’s actually the sea that makes them significant.  A scant 600 acres within a terrestrial setting may seem entirely inconsequential, but if you place those acres in the midst of a stormy sea, they can suddenly take on a much greater significance.  Appropriately, given the underlying hereditary theme, Nicolson has spent much of his life seemingly absorbing the islands into his very DNA.  For this reason, no one is more qualified to strip away layer after layer of mystery to reveal the islands’ many secrets.

In a rather roundabout – but entirely interesting – manner, the author presents the story from numerous perspectives.  Whether he’s discussing the geology and meteorology that make these isolated isles so interesting, describing the wildlife that gives the place character or uncovering the history that makes the islands so fascinating, Nicolson creates a mesmerizing chronicle of a place apart. 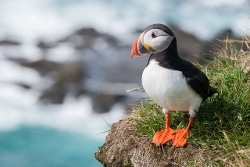 He also includes plenty of personal adventure along the way.  Whether he’s sailing the rough seas, wrestling with stubborn sheep or swimming with cute puffins, Nicolson brings both the beauty and the isolation of the islands to the page, revealing much about why he finds them so captivating.

The best part of the book is when the author recruits a team of archaeologists to start digging.  Thanks to their efforts and expertise, Nicolson is able to paint a clear picture of the island lives that have gone before his.  He presents a fascinating glimpse of premodern life, which for hundreds of years changed very little from the Stone Age.  He then proceeds to envision how the development of the modern global economy in the late 18th and early 19th centuries quite rapidly caused the demise of this ancient way of life.  Ironically, modernization and globalization served to isolate the Shiant Islanders, making their uniquely self-contained rural economy unsustainable.

It’s astonishing how much can be said about three seemingly inconsequential specks of rock.  Comprised of equal parts adventure writing, personal biography, riveting history and solitary rumination, Sea Room is a remarkable account of a uniquely special place.