Sea is Quiet Tonight, The 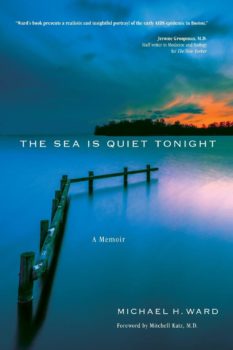 Terror inevitably fades with time.  While HIV is still a scary virus that seriously impacts ones health, it’s no longer the certain death sentence that it once was.  But in the early ‘80s, if you were a gay man, particularly in big cities like New York, Boston or San Francisco, the terror was very real.  Healthy young men were taking ill and dying quite suddenly – sometimes in just a matter of months – and even the best doctors didn’t really know what to do.  In The Sea is Quiet Tonight, retired psychotherapist Michael Ward tells about his personal experience during those frightening years, a transformative time for the gay community and the country as a whole.

In his late thirties at the time, still searching for an ideal relationship, Ward describes his first meeting with Mark in 1981.  Mark was a bit of a Renaissance man who really hadn’t figured out what he wanted to do in life and Ward was instantly smitten.  As the bond between the two men grew, rumors of a new mysterious and deadly disease, preferentially affecting gay men were just starting to circulate.

A gifted storyteller, the author recounts the many ups and downs of their passionate relationship, dropping only a few hints that Mark’s health was soon to be in jeopardy, despite his outwardly vigorous appearance.  Tragically, the two men would only have just over a year together before Mark’s health plummeted precipitously.   Ward’s account of Mark’s heroic struggle, as well as the tireless and fearless efforts of his nurses and doctors, is truly inspiring.

As only someone who actually lived it can do, the author grippingly captures the terrifying reality of AIDS in the early 1980s, before anyone really knew what was happening.    Given the incredible advances in HIV treatment that came in the 1990s, terms like Kaposi’s sarcoma and PCP pneumonia have almost become archaic, but I can still remember they were still new and frightening back in 1987 when I started my medical training.  Ward also captures life as an openly gay man after the liberation movement of the ‘60s and ‘70, but long before gay marriage was accepted by society.    His description of the social isolation and fear that came with every public activity is wrenchingly powerful.

Almost an entire generation of gay men was lost to the HIV virus, leaving the scattered survivors with lifelong emotional scars.  The Sea is Quiet Tonight conveys that reality vividly, assuring that the story of these brave men doesn’t fade away.  Both a gripping account of the earliest days of the AIDS crisis and a poignant love story, it’s a memoir of unique power.   Highly recommended.