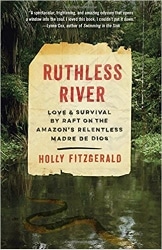 What should I write about?  I suspect it’s the most common question that comes up at any writing class.  Well, when Holly Fitzgerald signed up for a memoir writing class – with the encouragement of her daughter – she didn’t have that problem.  She knew she had to write about the harrowing twenty-six days she spent stranded and lost on a raft in the middle of the Amazonian rainforest with her newly-wed husband.  I’m assuming she got an A in the class, because Ruthless River makes for some truly riveting reading.

It was supposed to be a honeymoon like no other.  Holly and her husband Fitz were going to spend most of 1973 traveling around the world, taking in as many new experiences and cultures as they could afford on their limited budget.  Having no set schedule, their plans were flexible and frequently improvised.  Unfortunately, due to a minor plane crash in southern Peru, they were stuck in the small city of Puerto Maldonado.  No boats were scheduled to leave for months, so they made the ill-advised decision to hop on a small raft and float downstream on the Madre de Dios River, hoping to make it through more than 200 miles of uninhabited jungle to Riberalta, Bolivia, the next stop on their planned trip down the Amazon. 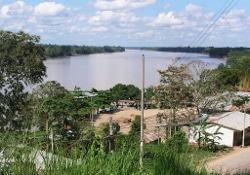 The Madre de Dios River at Puerto Maldonado, circa 2004.

But the river had different ideas for these Huck Finn wannabees.  Storms and flooding ensued, leaving them stranded in a backwater in the middle of nowhere with no land in sight.  Short on food, with just a plastic tarp to shield them from the elements – and the insects – they were completely screwed.  For twenty-six days they struggled to survive, driven only by their unwavering determination and their love for each other.

Full of remarkably vivid and terrifying tribulations, Fitzgerald’s account is a convincing testimony to the perils of optimism.  For a few weeks, Holly and Fitz let their dreams get the better of them, thinking that even the most perilous idea was achievable if they believed in it strongly enough.  At the same time, I’m willing to admit that neither of them would have survived if they weren’t so unremittingly optimistic.  A double-edged sword to be sure.

To be honest, the reality-based reader might find the couple’s unrelenting – and unwarranted – optimism a bit annoying.  What were these two inexperienced travelers thinking, heading out into the Amazonian wilderness on a whim?  The fact that they ended up almost dying is not at all surprising.  But somehow, by recounting the many different ways they fought for their survival, Fitzgerald manages to make the story both compelling and captivating.

Having waited more than 40 years to tell her story of death averted, Fitzgerald has demonstrated a level of patience that is a thing of the past.  Waiting this long doesn’t actually do the story justice, as the decades of technological advancement that the world has experienced since then would likely have made their rescue much more rapid and feasible in the present day.  In the end, Ruthless River is a uniquely engaging survival story that makes for a thoroughly entertaining and inspiring read.

Check out these other books about survival:   Deep Down Dark   /   The Story of a Shipwrecked Sailor   /   Deep Survival