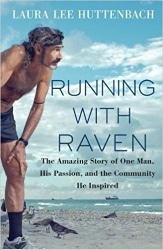 What’s the most incredible thing you’ve never heard of?  I’ll admit that the question is completely unanswerable, but I’m willing to bet that you didn’t know that there’s a man who has run the same eight mile loop along the southern half of Miami Beach every single day for the past forty years.  His name is Robert Kraft – called Raven by his many friends – and his running streak may well be the craziest thing in the history of sports.

Over the years, he’s collected almost three thousand running buddies – from 87 different countries – who have joined him on his daily jog.  Writer Laura Lee Huttenbach – known as “White Lightning” in Raven’s world – is one of those runners, having logged more a thousand miles with the man.  In Running with Raven, she tells the unique and bizarrely inspirational story of this passionate running fanatic.

Back in the early ‘70s, running wasn’t much of a thing.  But Raven found some solace in it, having recently been down on his luck and drinking too much.  It was also a great way to meet girls on the beach.  He enjoyed the runs and on January 1st, 1975, he decided he was going to run his eight mile loop every day for a year.  One year turned into more than forty and the rest is history.

Miami Beach in 2006. If you squint just right, you can see him off to the left.

Along the way, Raven has made countless friends who have joined him on his runs.  Actually, they aren’t countless, as Raven – a man with a bit of an obsessive personality streak, if you didn’t notice – keeps track of every new runner, bestowing a coveted and distinctive moniker on anyone who makes it the full eight miles.  He also keeps track of return runners, often displaying an astonishing memory of each runner’s history.  To this day, every afternoon, no matter the weather, people – some days just a few, other days maybe dozens – still participate in the daily Raven Run.  Huttenbach does a great job delving into the lives of the many entertaining and inspiring characters that make up Raven’s unique running community, skillfully capturing the spirit of this local institution.

To paraphrase Heraclitus, “no one ever runs the same beach twice”.  Even though he has more than 15,000 runs under his belt, I think Raven would agree, as he’s watched the city of Miami Beach gradually transform itself over the decades.  Full of fun anecdotes and curiosities, Running with Raven successfully captures the enthusiasm and passion of this inimitably heroic man and the remarkable community of runners that supports and motivates him.  Highly recommended.

Check out these review of books about other fanatical athletes:   Called Again   /   Swimming to Antarctica   /   Walk of Ages   /   Alone on the Wall