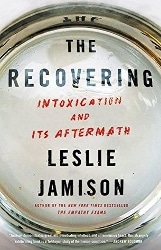 Ethanol.  It’s one of the simplest organic molecules, but its innocent appearance hides the fact that just a bit of it dissolved in the human blood stream can have profound consequences.  Since the dawn of civilization, people have struggled against its seductive powers, often failing to control it. Leslie Jamison is one who has struggled more than most, building a fragile world with alcohol at its center.  She tells her story with unique tenacity and unrelenting honesty in The Recovering.

The book gets off to a tough start.  Having enjoyed her previous collection of acclaimed essays, The Empathy Exams, I thought I liked the woman.  But her harrowing description of a life of alcohol addiction and obsession is really hard to take, particularly when you begin to realize that the writer that you had previously found so intriguing was intoxicated most of the time.  Which really seems to be Jamison’s point, she spent most of the first three decades of her life trying to avoid herself, creating an illusion, hiding behind a façade of alcohol.

But then she goes to her first Alcoholics Anonymous meeting and starts to show the first inkling of insight.  Suddenly, the flood gates open and Jamison’s remarkable powers of observation and self-analysis are revealed to their fullest.  She doesn’t hold anything back, ruthlessly dissecting her relationships, selfishness and ego trips with merciless and breathtaking savagery.  Like she’s peeling an onion, she explores the rationalizations that feed off other rationalizations right down to her very core.  It’s potent and intense stuff, presented in a surprisingly suspenseful and riveting style.

Much of the book is structured around the author’s doctoral dissertation at Yale which explores the connections between addiction and literature in the 20th century.  Addressing the myth of the inebriated genius, she draws on the lives of famous drunk writers like Raymond Carver, Malcolm Lowry, Stephen King and Denis Johnson.  Was it addiction that made them great?  Could they achieve literary acclaim and be sober at the same time?  These kinds of questions perpetually plague Jamison – a woman with literary aspirations of her own – and drive her to explore them deeply.  As the book clearly reveals, male writers don’t have a monopoly on addiction and Jamison focuses much of her analysis on Jean Rhys, the acclaimed Dominican novelist.

When she’s not revealing the depraved lives of 20th century writers, the author tells the story of AA from its founding in 1935 to the present day.  One of the great examples of collective healing in human history, she goes to meetings around the world and the intensity of these moments are some of the highlights of the book.  She also critically analyzes the many ways that the “War on Drugs” has managed to make America’s addiction problem worse.

Full of gut-wrenching catharsis, intriguing literary analysis and brutal introspection, The Recovering is a frequently breathtaking and powerful account of one woman’s life of addiction.  It’s often painful to read, but I couldn’t recommend it more strongly.  I haven’t read all the addiction memoirs out there, but I suspect that this is one of the best.

Check out my review of The Empathy Exams.