Reality is Not What it Seems 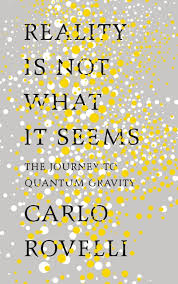 It’s a bit of a spoiler title.  But if we’re honest, going back as far as Copernicus and Galileo, it’s been pretty clear that Reality is Not What it Seems.  Whether we’re trying to appreciate that the Earth isn’t flat as it appears or that the Sun isn’t actually revolving around us, humans have always struggled to understand the world as it really is.  Ever since Einstein shocked the scientific world one hundred years ago, that struggle has become increasingly strange.  Fortunately, there are gifted writers like Italian physicist Carlo Rovelli who can explain how scientists are trying to make sense of all of nature’s nonsense.

Hanging his narrative on a historical framework, Rovelli describes how modern physics has been constructed piece by piece, transforming our view of reality in the process.  But the effort is far from complete.  Covering both ends of the spectrum, general relativity – the theory that explains the universe at the cosmic scale – and quantum mechanics – which explains nature at the atomic level – are both convincingly proven concepts.  Unfortunately for all physics enthusiasts out there, they seem to be irrevocably at odds, which explains why present-day physicists like Rovelli and his colleagues at Aix-Marseille University continue to show up to work each day.

Democritus, known as the Laughing Philosopher

Known as quantum gravity, it’s the theory that’s going to bring everything together.  But the devil is most certainly in the details and Rovelli is more than happy to take us along for the ride.  Systematically dismantling some seemingly essential concepts like time and space, the author is adept at coherently explaining the numerous counterintuitive leaps required to make sense of it all.  Although, to paraphrase what Richard Feynman said many years ago, anyone who thinks they really understand quantum physics doesn’t really understand quantum physics. 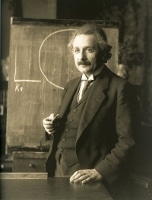 Almost without fail, whenever scientists dig deeper into the essence of things, the more counterintuitive their findings become.  But despite the mind-bending nature of the topic, I have to confess that I’ve never read anyone who can explain these topics so well.  I fully expect that every reader – at least those who don’t have advanced physics diploma hanging in their cave – will have occasional moments of brain cramp during these proceedings.  I certainly did.  But at the same time, I also had numerous revelatory moments as Rovelli’s dexterous explanations sunk in.  His ability to illuminate is really quite unique and astonishing.

While Rovelli pushes the story right to the edge of current knowledge – with some fascinating speculation into the future – one of the things I appreciate most about his narrative is the light he shines on the ancient Greeks.  His frequent insightful references to the work of geniuses like Democritus, Aristarchus and Archimedes provide a remarkable balance with more recent protagonists like Einstein, Dirac and Feynman.  The idea that some of the initial groundwork for 20th century quantum physics was laid down more than 2000 years earlier is nothing short of amazing.

Originally published in 2014 as La realtà non è com ci appare, this book would never have appeared in this updated 2017 English edition if it wasn’t for the lovely language skills of Simon Carnell and Erica Segre.  Somehow, these talented individuals are able to translate Rovelli’s original Italian without a misstep, producing an English work that is as poetically pleasing as it is informative.

Humans can directly sense only a tiny fraction of the universe.  How have we managed to create a comprehensible reality from this?  In Reality is Not What it Seems, Rovelli provides an intriguing and compelling answer to this question that literally encompasses the full expanse of space and time.  Real science written by a scientist who isn’t afraid to proffer his own opinions, it’s a treat for any physics aficionado.  More cohesive than his previous best-selling Seven Brief Lessons on Physics – which was actually written after this book – I can recommend it just as highly.  Be prepared for a truly surreal experience.

Check out Dave’s reviews of other modern physics books: