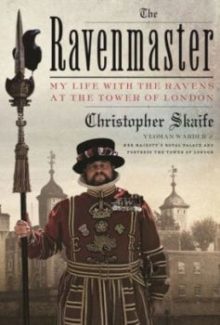 They might be the most famous birds in the world right now.  The ravens that deliver messages from castle to castle in Westeros on HBO’s Game of Thrones are viewed by millions of fans every season.  But there’s a castle in the real world that serves as the home of ravens.  It’s the famed Tower of London, and it’s been “guarded” by wild ravens for centuries.  A retired Staff Sargent in the British Army, Christopher Skaife is their primary caretaker, known as The Ravenmaster.  It sounds like one of the best jobs in the world, if you’re into ravens. 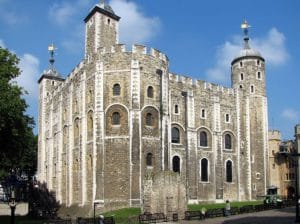 The White Tower is the central tower at the Tower of London.

After serving in the army for 24 years, Skaife assumed the official title of Yeoman Warder and Ravenmaster at the Tower of London.  This transition required him to learn an entirely different kind of intellectual combat, clever wild bird versus determined land-bound ape.  As a raven neophyte, the author didn’t really realize what he was getting into, but he learned quickly. 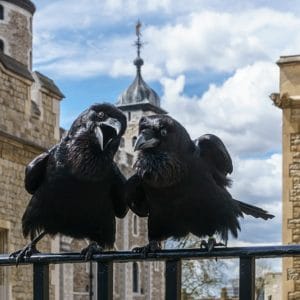 Jubilee and Munin wreaking havoc in 2016.

Skaife describes much of day to day life with the ravens, from feeding them blood-soaked dog biscuits to protecting them in the hustle and bustle of one of London’s most visited tourist attractions.  Over time, he gradually has grown to respect the bird’s remarkable intelligence and he clearly enjoys getting to know the birds, each one with its own personality and idiosyncrasies.  His repeated – and often death-defying – efforts to encourage cooperation and good behavior amongst his mischievous feathered wards make for the best part of the book.

He also includes some of the history of the tower, the site of some of the most famous duplicitous shenanigans – and executions – in Great Britain’s storied history.  It’s a pretty dark place – perfect for the most morbid of birds – but the author clearly delights in revealing many of its intriguing secrets.

Say what you will about the British monarchy and its often overly extravagant traditions, but I’m a fan of any system of government that puts its entire existence into the hands (?) of an unkindness (or treachery or conspiracy) of ravens.  The Ravenmaster provides an entertaining – and often humorous – look into the dark world of this great tradition.  Recommended for anyone with a general interest in birds or a more specific interest in British history.

Check out Dave’s review of another book about corvid antics in The Gifts of the Crow.