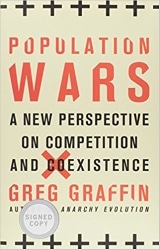 Ethicists have been guided by the natural world for millennia.   But it’s a practice fraught with hazards.  Should we emulate the swan for its admirable monogamy or shall we follow the bonobo chimp’s lead and engage in frequent sexual orgies?   Anyone who pays any attention to the natural world knows that you can support or condemn any human behavior by finding a creature that exemplifies your particular passion.  It’s cherry picking in the extreme.  Not surprisingly, as scientists continue to improve their understanding of life on Earth, new attempts to use the natural world to guide our behavior will appear.  So it is with Population Wars, Cornell science lecturer – and Bad Religion lead singer – Greg Graffin’s exposé on the evolution of life and human society. 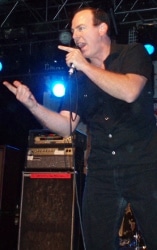 The author performs with the band in 2007.

As he did in his more biographical – and more musical – Anarchy Evolution (2010), Graffin covers a lot of ground here.  He starts at the (very) beginning with a fascinating review of the origin of multi-cellular life about one billion years ago.  Opposing the traditional narrative of constant Darwinian competition as the driving force of evolution, he points out that the human body – as well as every other large organism, from dandelion to dingo – is actually a conglomerated mishmash of all sorts of bacterial and viral components that cooperate to create coherent and smoothly functional species.  It’s hard to argue with him, given that the human body harbors ten times as many bacterial cells as it does human cells.  Astonishingly, Graffin cites data to suggest that as much as 43% of our human DNA is actually of viral origin.

In Act II, he charts a completely different course and reviews much of the history of the Iroquois Nation in his neck of the woods in western New York.  As their politically sophisticated leaders struggled to control, cajole and capitalize on the presence of French trappers, English settlers and other Native American tribes in the region, a similar sort of conglomeration occurred.  This time of a cultural variety.  Rather than pure competition and extinction, the different groups involved experienced a blending of cultures, each contributing to the end product. 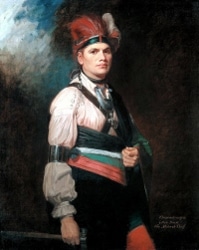 Lastly, Graffin takes all of these ideas and presents them as a guide for understanding the modern world and planning for our future.   Arguing for the primacy of history, he makes a convincing argument that without its complex bacterial and viral background, the human species wouldn’t exist.   Even though we think of ourselves as entirely human, we owe most of our existence to those who went before us.  While those who live in New York State may think of themselves as entirely American, much about their current political and social structure dates back to the Native Americans who preceded them.

Taking these arguments to their extreme – which Graffin never seems reluctant to do – it’s hard to define what we really mean when we talk about “the human species” or “the United States of America”.  Even the core idea of humans as discrete individuals with free will is called into question.

In the end, ethicists, moralists and opinion emitters of all stripes fall into one of two camps.  Either humans are inherently good individuals who occasionally stray into morally dubious territory or we’re brutal savages who rarely manage to curtail our basest urges.  Which side of the dichotomy you choose really seems to make all the difference.  Graffin appears to live quite contentedly in the former camp, even though most realists would argue that the jury is still out.

Presenting a uniquely wide-ranging and personal view of human existence, Population Wars is often quite interesting.  I’m not sure I agree with everything Graffin says – I think he may be fatally optimistic about human nature – but I have to give him credit for thinking in profoundly creative ways.  His determination to eschew conformity and let his punk rocking personality impact his scientific cogitations is to be applauded.  Recommended for anyone who enjoys challenging conventional thinking.