Pilgrim on the Great Bird Continent

Put a bird on it… 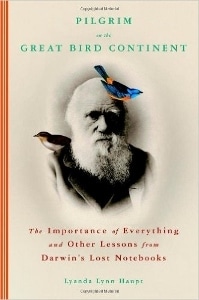 Science in action! Not test tubes, lab rats and particle colliders, but the actually development of an earthshattering scientific theory in the mind of a singular genius.  It’s not something we get to see very often, if at all, but it’s the inspiration for Lyanda Lynn Haupt’s investigation of four critical years in the life of Charles Darwin, entitled Pilgrim on the Great Bird Continent.

In December 1831, the twenty-two year old Darwin set sail on HMS Beagle and spent the next four years exploring South America, from Brazil down to Tierra del Fuego and then back north to Peru and on to the Galapagos Islands.  He was young, naïve and scientifically unsophisticated, but he was also remarkably meticulous in his note taking.  Documenting day after day of detailed interactions with nature on the continent that is home to more different species of bird than any other – three thousand seven hundred and fifty-one to be almost exact – he wrote copious notes, journals and descriptions of everything he did. 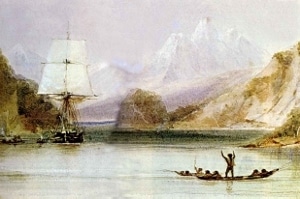 A painting of HMS Beagle in Tierra del Fuego by Conrad Martens.

Haupt, a Seattle-based nature writer and avid amateur ornithologist, takes advantage of these documents in her attempt to map out Darwin’s remarkable transformation from nature-loving neophyte to great scientific geniuses. Something happened, somewhere in the wilds of South America, and by seeking out every detail, Haupt attempts to zero in on that moment of transition.  In the process, she creates a thoroughly entertaining look at four of the most important years in the history of biological science. 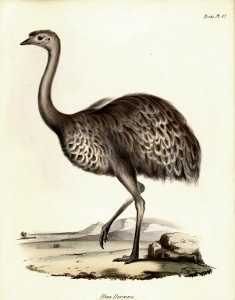 A drawing of the lesser rhea by John Gould, one of Darwin’s contemporaries.

Haupt makes it clear that without four years of observation and study, Darwin wouldn’t have had what he needed to place the biologically unique Galapagos Islands into any sort of context. Even then it took him more than an additional twenty years to make sense of it all and go public with his theory of natural selection.  It made this reader wonder how things would have turned out if Darwin had failed.  What if he hadn’t survived the trip?  Bad weather, unfriendly natives or tropical disease could easily have curtailed his adventure.

Would anyone else have had the requisite exposure to a massive “continental laboratory” to develop an adequate understanding of evolution and its myriad variations to convincingly sell the idea to the scientific community at large? With less copious data or even a slightly smaller helping of genius, Darwin’s theory of natural selection might have died in its infancy.  Alfred Russel Wallace came to the idea independently, but didn’t have the gravitas and loads of data necessary to successfully argue such a contentious idea.  It took Darwin’s unwavering efforts to actually seal the deal.

Only touching on evolutionary theory amid sprinkles of personal insight and reflection, Haupt’s chronicle is primarily a detailed exploration of what made Darwin so unique. Was it his careful and thorough record keeping?  Or the unusual empathy he had for other living creatures?  Or was it simply his remarkable perseverance and determination?  With her own fondness for detail – often providing a word by word analysis of the journals and notes Darwin’s compiled while traveling around the continent – the author manages to provide an engaging consideration of each of these possible explanations.

Upon his return to London after circumnavigating the globe, it’s not surprising that Darwin wasn’t the same man he was when he left home five years earlier. Intriguing, thoughtful and wide-ranging in its scope, Pilgrim on the Great Bird Continent reveals the details that made Darwin a changed man and set him up to achieve scientific immortality.  It’s a superbly conceived four-year biography that I can recommend highly for any fans of quality science history.

Other reviews of books about birds: