Order of Time, The

Reality waits for no man… 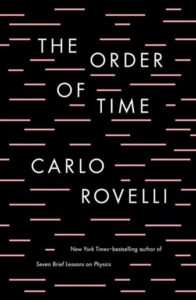 It’s hard to imagine how we could live without it.  There may be nothing more basic to our daily experience than the concept of time.  But much as Copernicus showed that the seemingly solid and stationary ground on which we walk is actually hurtling and spinning through space, the passage of time is also an illusion of our own making.  “Says who?” you might ask.  “A theoretical physicist named Carlo Rovelli,” I would answer.  There may be no writer who can so coherently and concisely illuminate the mysteries of the quantum world.  And he’s done it again in The Order of Time.

Expanding on his previous efforts – Seven Brief Lessons on Physics and Reality Is Not What It Seems – Rovelli makes the inscrutable remarkably comprehensible, clearly explaining how time may be nothing more than an illusion.  While time is a useful concept if we’re trying to understand the world on a human scale, when physicists explore the universe at its very smallest and very largest, the concept of time not only breaks down, it basically disappears. 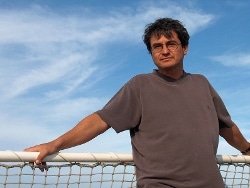 He goes on to speculate that since humans only experience a tiny fraction of what’s going on in the cosmos, our brains have necessarily evolved ways that allow us to make sense of it all.  After all, our brain’s prime directive is to contribute genetic material to future generations and any sort of intuitive understanding of quantum theory or cosmology probably doesn’t contribute much toward that end.  Rovelli argues that the concept of time may simply be one of the ways our brain creates a sense of order, boosting the reproductive fitness in the process.  Reliance on the concepts of past, present and future may be the ideal way for an intelligent organism to organize its behavior, but upon deeper analysis these concepts turn out to be illusory.  Their ubiquity within the human experience say more about how our nervous system evolved than it tells us about the universe we live in.  Events happen and often in a particular order, but the idea that time marches on inexorably and independently is nothing more than a concept we use to run our lives and interpret our environment.

If you think that all this sounds like complete nonsense, I don’t blame you.  But Rovelli is an incredibly gifted explicator who relies on cogent logic and simple language to build his remarkable argument.  His smooth prose flows easily despite the challenging topic and I find it hard to believe that anyone could do it better.  If you’ve never read his work before, I highly recommend any of his three surprisingly popular books, each of them deftly translated from the original Italian by Erica Segre and Simon Carnell.  If you’ve read his earlier works, I’m confident that you’ll enjoy this one just as much.

Both cosmically beautiful and scientifically articulate – while using only one simple mathematical equation – The Order of Time is bursting with passion and mind blowing concepts.  Oftentimes more poet than scientist, Rovelli presents a view of our universe that is both fascinating and awe inspiring.  Highly recommended.

Check out my reviews of Rovelli’s other books:  Seven Brief Lessons on Physics   /   Reality is Not What it Seems